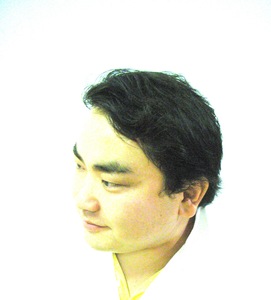 Masashige Furuya was born in 1980 and raised in Tokyo, Japan.
In his childhood, he expressed an interest in making objects with clay,and in teens, he held such a great interest in the artistry that he moved to Ishikawa Prefecture to work at a pottery studio with the aim of becoming a professional artist.
But it wasn’t easy, and eventually he gave up.

He had abandoned his childhood dream and fell into despair.
Thankfully, he received a great amount of encouragement and support from his friends who taught him the importance of strength and flexibility, which became pillars in his core values.

Although he had once given up, he continued to hold in his heart the desire to be involved in the world of art.
He worked to hone his oil painting skills at art school and began participating in art exhibitions in 2001.

However, he still doubted himself at times and wondered whether someone who had given up on their dreams at a point in their lives could once again reignite their dream and realize their ambition of becoming a professional artist.

Despite his hesitation, he continually thought about those who supported and influenced him during his times of hardship.
He also thought about the values of flexibility and the belief in the capacity to change one’s life that they had instilled in him.
It was 2005 when he made a decision to fully return to the road of Art again.

After overcoming his fear, he worked hard on producing works of art and promoting his work at art exhibitions.
Since 2011, he has taken part in group exhibitions around the globe and in solo exhibition in NY in 2012 and 2014.
In addition, he has gained a permanent display at a Tokyo restaurant and has a part of his collection on display at three other locations.

Since 2007, he has specialized and consistently used acrylic paint in his art work which he has favored due to its inherent traits of being able to be used to paint on a wide range of materials and also due to its quick-drying nature.

In 2015, taking advantage of the characteristics of acrylic paint, and expanding his art depth beyond canvas panels, he started to paint on Sake cups.

His trademark motif has shined through in his work in the form of paintings of human beings, which he portrays by capturing the complex essence of individuals through focusing on the small attentions to details in the artistic display of facial expressions and gestures.
His interest and focus on human beings came naturally as a result of the fact that the ‘support of people ‘ had brought him to realize his dreams.
In addition, he has focused on the human element in his art in order to affirm the importance of the existence of human beings precisely because there is a feeling of appreciation for human beings that has become a part of who he is.

Around 2011, he became inspired through the act of watching people interact at bars where the spirit of human interaction seems to come alive.
His venue for finding inspiration and subjects for his art may, at least in part, be attributed to his grandfather having owned a bar that he had frequented since childhood.

He finds bars to be the quintessential place to discover muses for his art and he is constantly observing the human element in them.
While groups of ‘individuals’ share drinks and enjoy one another’s company he observes and awaits that moment of inspiration to come upon him so he can memorialize it in his art.
The bar element allows him to witnesses not the future, nor the past, but rather the exact moment of bliss that occurs as human interaction begins to allow patrons to transcend the ordinary and mediocre lives they leave behind while submersing themselves in the environment and company of others. While some may not truly understand his pursuit of capturing the human essence, through his art he is able to express and share his passion for the human element.

Masashige Furuya was born and raised in Tokyo and expressed an interest in making objects with clay when he was a child. Furuya began to work as a painter and studied oil painting at art school.

He now creates art by combining oil and acrylic paints. Furuya’s work describes our imagination and perceptions – what we see and what invisible to the human eye.

During his childhood, Furuya spent a great deal of time in his grandfather’s skewer grill bar, where he observed calmly without feeling admiration, many drunken scenes.

Now years later, Furuya as an adult has a different “view of the bar” and the “adult world” he could not understand as a child. He sees the time between when work ends for the day and a new day dawns as precious, but not always filled with delight and happiness. Sometimes it is also filled with tears and complaints. However, Furuya feels this is a special time.

Furuya believes that since sake is something we offer and dedicate to God, this is a time when God forgives us. This means that the time spent drinking is nothing but very precious.

This time of bliss exists within our ordinary and mediocre lives. Some people may see this as a stupid pursuit but to Furuya this contains an important message for him.