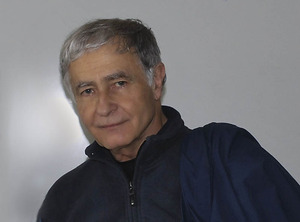 He is a landscape and portrait photographer. His best photographs are a from collection about an old man who lived alone in the heart of Slovenia. He had 11 children. The winter was cold and as he could not lit the fire he was frozen.
The book Stanko was printed showing his last days. It has got five international awards till now.
Herman was paralised in 1985, but he recovered in ten years so well that he can fly a paraglider again. He published a book about his recovery ( Do not give up your dream)
He also published severl photo books like Skye light, The touch of the light., Sibiria, A portrait of a photograph ( Stojan Kerbler), Jajce, a monography about Bosnian town...
FIAP, Internacional association for art photography, gave him the title MFIAP, master.
He has many exhibition in world galleries and has got ,many internacional awards, the last one gold and silver in Moskow ( MIFA)
He lives in Slovenia

A story about a man and a house

In the mountains in the middle of nowhere, a full hour’s walk from the nearest village, I met a man, 80 years old, living alone. His name was Stanko.

He was kind and invited me into the house. The house was more than 200 years old. I was shocked when I saw the inside and could not believe somebody could live like this in Europe in the 21st century. The walls were yellow, green and black. There was barely any furniture, just a few pots here and there, an old clock that did not work and some photos taken many decades ago on the wall. The windows were small. What little light they afforded served only to emphasize the house’s sparse contents.

It is a sad story. I learned that he had nine children, but nobody would take care of him. His wife died long ago. He had little money and would spend all on cigarettes and wine. Yet living alone like this in the country made him happy. He had some land and sheep. I was visiting him frequently and we become friends.

The winter of 2008-2009 was very harsh. Lacking a heater and unable to light a fire, he died of cold. I felt a deep sorrow when I learned that he had died.

I still remember his eyes. They were like mirrors. Through them you could see the pain suffered by so many. His portraits really move me. Yet they show how life must have been for many even a century ago.

To me, Stanko seemed to embody all old and poor people. When one sees these images, many questions arise. One day, we will become old. Who knows how will we die. Alone? Poor? Sick? What is the point of living?

My friend, the old man, died. One of his sons inherited the house. He has started to preserve his old home.

Photographing Stanko and listening to his stories was a great experience for me. It forced me to intensively think about what matters in life. The collection is also a sociological study. It invites the viewer to think about it.