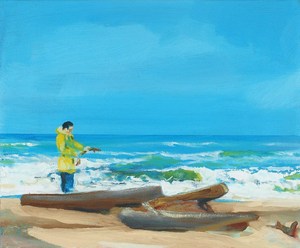 " I am a north-American artist and craftsman, born 1949 in Massachusetts / USA. I had spent my childhood at the family-farm and started with painting (oil and watercolor) at age 10.

From 1970 - 1980 I used to live in Toronto, Canada, made a living as a handyman, as a surveyor and as a painting artist.
My art-studio at a big old warehouse at the High Park District was also used as a showroom for my exhibitions.
1975 - 1986 my artwork (-mostly oil- and watercolor paintings) was sold within Canada, to Europe, to Japan and within the USA.

In 1980 I moved back to the USA, to San Francisco in California. At the San Francisco Bay Area I resided for the following 28 years.
Several exhibitions took place at cafés / restaurants, mostly at the Potrero Hill and at the Castro district in San Francisco.
In the 90th I had an art-studio for several years on Bryant Street, at the Mexican influenced Mission district - with public studio walks and exhibitions.
Additionally I worked as a self-employed handyman/painter and restored old furniture.

During the years 2001 - 2008 I extended my creative work:
I built unique garden furniture - out of driftwood, collected at the beaches of the pacific ocean near San Francisco, I designed and built the stage sets of the theatre-pedagogical project 'Behind closed doors' and I painted several murals for customers in San Francisco.

From August 2008 to December 2016 I used to live in Berlin / Germany. My focus was back on painting - at my art-studio, the 'LadenAtelier Brennan' in Berlin-Neukölln / 'Schillerkiez'.
Since January 2017 I live and work outside of Berlin, in the state of Brandenburg."

" Some of my artwork deals with social and political topics. Also environmental statements are made in landscapes thru the use of unnatural colors in sky or water.
In general my artwork is a hybrid of expressionism and impressionism; however it is best to classify myself as an expressionist. Many abstract compositions are developed thru experiment and impulse. Composition is developed by contrast and or balance of colors. Form and a sense of change and movement in figurative works are key elements in many paintings. Often I overlay two subjects, either in conflict or in harmony. A paintings composition is often the result of an experimental artistic exploration.

My work is colorful; from painting to painting and workgroups style can change. My art has many different subjects and methods.

Sometimes I prefer not to title my paintings, thereby allowing the viewer the opportunity to play with his own imagination. There is a lot to see, to explore and to find within my paintings. I often like to suggest and leave the conclusion up to the viewer. To go further within that process, I can direct the attention of the viewers' thoughts..

I enjoy creating and the sense of accomplishment upon completing a painting.

I have limited formal training, I am self-taught and motivated by pleasure of being creative. Work is fun! "