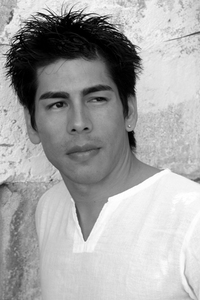 The Swiss artist's work with gold, now on display at the HCM City Fine Arts Museum, reflects a philosophical perspective that is rooted in his personal upbringing.
Sarbach, also known as Tom Fly, is showing 22 abstract oil paintings that also uses 24k gold leaf in the exhibition titled Golden Art for Golden Time.
The 39-year-old artist first connected with gold as a working material in the 1990s and has major worked with it since 2007.
Born in Paraguay in South America, a site of gold wars, Sarbach grew up in Switzerland as an adopted child.
His work is inspired by both beautiful and gruesome stories about gold, as can be seen in the painting, Bloody River.
But in Sarbach's hands, gold also depicts water, buckwheat fields, sun and the earth in works like Golden Green, Golden Water and Golden Sun, emphasising that everything in life is as precious as gold.
Sarbach spends several months on a painting.
"Each painting is covered by an average of 20 layers of oil and a last layer of gold foil which is mostly produced in a Buddhist monastery in Thailand," he said.
Sarbach studied at L' Ecole des Baux Arts (School of Fine Arts) in Sion, and then trained as a graphic designer. In 1991, he entered the College of Arts and Crafts in Bern.
He now owns two galleries in Zurich. He has held exhibition in many countries like Japan, Thailand, Singapore, Indonesia, Belgium, Brazil, and Mexico.

Influenced by his birth in Paraguay in 1973 and upbringing in Switzerland, Thomas Sarbach, also know as the artist Tom Fly, draws inspiration from “the simple things” and nature. His abstracts, in oil and acrylic, typically incorporate the element of gold, a color and material that holds importance for Sarbach on multiple levels. The first graffiti artist in the south of Switzerland, one of the founders of the gallery “young-art-factory” in Luzern, and a passionate painter, Sarbach uses his medium to communicate to other souls.
www.thomas-sarbach.com