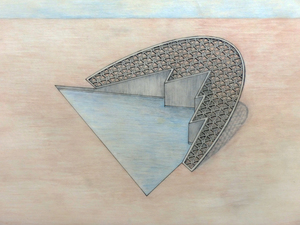 • 2015 - Third Prize in the “2014 China-Fuzhou International Sculpture Exibition”
• 2016 - Winner of the “ Inukshuk Sculpture Competition “ by the ‘Jerusalem Foundation’.

• Erected more than 70 Outdoor and Environmental Sculptures in Israel and abroad.

What is called "pure art" travels into the artist's innermost consciousness and psyche. This is the "environment" where its stimuli emerge and its roots thrive. "Pure art" interrogates and scrutinizes the artist's world, interrogates and perfects the expressive means with which it builds emotional and cognitive structures in the private space of the artist's workshop. On the other hand, environmental art is made for and within public space. Unlike so many outdoor sculptures, it is not wrenched out of its "private" context to be transposed into public space, but, rather, originates in the artist-environment relationship, out of which it takes shape and evolves. A work created in private space and a work rooted in an environmental context differ in the openness and listening they command. In the latter a taut dialogue is conducted between the environment's mental and physical uniqueness and the artist's creative idiosyncrasy.

Unlike regular sculpture, which derives from the dialogue between the artist and his material, environmental sculpture stems from the dialogue between the artist and the environment, and its existence is predicated on the special relationship it develops with its environment. Throughout my career I have conducted dialogues with a variety of "environments." At times, the environment was urban, grey, and dense, at other times I worked with a majestic landscape. Sometimes the sculpture itself turned into an environment, introverted and removed from its external context. Each environment featured its own spatial situation, history, and human element. Each environment has been affected by the cultural vision and economic-political constraints that defined its purpose and use. These dialogues, which evolved in so many different climates, nevertheless sought, each in its own way, the same aim, the same intimate encounter between the "viewer-participant" and the work of art.

Over the years I have built sculptures within both architectural and urban contexts: stage sculptures, water sculptures, play sculptures, landscape sculptures, memorial sculptures. All these sculptures required specific attention to the environment and subject as starting point. I don't know whether my adventurous instinct, eager to break the limits of practice and matter, drew me to environmental sculpture or whether the latter's challenges enriched my creative imagination and expanded my openness and curiosity, which are no less vital to an artist's private work. The constraints I grappled with turned into challenges. Though they limited my choices, they gave me an inner freedom and helped me break habits, conventions, and stylistic patterns.

In this sense, I believe environmental art, and environmental sculpture in particular, are akin to architecture. Similarly, though with different emphases, they are called upon to conduct a continuous dialogue with a variety of constraints: spatial, budgetary, subject-related, and functional. Like the environmental artist, the architect does not build the concrete product himself but conceives and plans it and supervises the executive team. I have often collaborated with architects, and my work has fitted into theirs. But a collaborative work as such has been rather rare.

The architect is not the only factor responsible for the success or failure of architectural works. Architecture worthy of its name requires resources, an enlightened initiative, and mainly a social awareness whose top priority is the human being as consumer of spiritual welfare. If the artist is to be relevant here, it is not as a provider of "suitable works of art" for an architectural space but as a creator-collaborator whose awareness, imagination, and professional skills can contribute toward this welfare. The following works are an example of such collaboration: the Memorial Park for Fallen Soldiers in Ashdod (1976), designed in collaboration with the architects Tzvi Dekel, Yossef Segal and Uri Miller of Tichnun Nof Ltd.; design of the Mediterranean Art Center Theoule-sur-Mer in Southern France (1978), designed with the architect Arieh Rachamimoff; redesign of the historical Bezalel Building (1993) in collaboration with the architect Peter Keynan.

When my work evolves outside an environmental context it exhibits three main features: it is interdisciplinary and investigative; it in no way clings to regular formal characteristics that are mistakenly labeled "the artist's personal style"; most often it conveys its messages through minimalism. Still, I do not endorse radical minimalism or minimalist structural complexity as an aim in itself. I believe good art is always minimalist in the sense that it uses only what is necessary and rejects any extraneous noise and clutter.

Over the years my works have examined, among others: the relationship between sculpture and mathematical principles (the geometrical sculptures, 1967-1969); matter as inspiration for the sculptural idea and the relationship between container and contained (earth sculptures and water sculptures (19731974); desert sculpture inspired by empty space and the building cultures of desert inhabitants (Desert Sculptures, 1980); application of an artonomic system to sculpture (The Black System, 1981-1983); the jewelry item as a dynamic sculpture worn on the human body (the jewelry series, 1989, exhibited in the Israel Museum).

My first visit to India in 1994, a culture shock that turned "the order of things" upside down, was an encounter between a "rationalist" of a monotheistic culture and the heady allure of the pagan world. As children we still carry the scent of this world, which captivates us with its enchanting legends and mythology. Still present in all of us, it is a hidden seed in the artist's depths, waiting for a moment of grace to emerge and blossom. India was for me this moment of grace. The memories of India created in me an emotional climate in which the sculptures Visual Memories were able to thrive. These esthetic, rational structures courting emotion have turned into esthetic, emotional structures that seek a rational answer to an undeciphered enigma.

In 1965, while at the British Museum in London, I came across an unusual sculpture: a nearly Two-meter tall head with a high brow and long ears from Easter Island. Rarely have I stood in front of a sculpture that radiated such an ntense presence. What secret allows such contact between a work and viewer who share ,either culture, nor time and place?

I believe this dialogue, which refers to religious vocation, touches on the essence of the spiritual on "the way up" that transports us from linear time to the infinite unity beyond it. If works offers. even partly, any evidence for this quality, I have not worked all those years in vain.

''Hadany Arch'', built in Williamsport, Pennsylvania, U.S.A. made of weathering steel 30-meter tall. The sculpture towers above the access road to Lycoming Mall and fits into the landscape and transit texture. It is the most monumental sculpture I have made, and one of the largest in the U.S.A.

1995. environmental sculpture, in Hadassah Park at the northern entrance to Beer Sheva, Israel

1984, environmental sculpture, Aminadav Forest, Israel.
A dirt road at the western edge of Aminadav Forest leads to the Arthur Rubinstein Observatory. The visitor taking this road will reach the Observatory platform with the memorial sculpture for the Maestro entrenched in and rising from it. The sculpture is made of marble blocks assembled into a dynamic structure reminiscent of a piono keyboard in action. The sun's movement shifts the shadow constellations over the sculpture, enriching its rhythmic harmony, whose flow responds to the movement of mountain ridges appearing westward in all their splendor to the visitor.

“''You who bear Memories of all Times''”

Proposal for a square in Ashdod,Israel

“Proposal for the New Entrence to Mount Herzl”

“Sculpture for The Generi Building under construction ”

“''Frame of Mind'', under construction”

“''The Jerusalem Memorial to the Victims of the Helisopter Disaster''”

“''Birkenau'' proposal for a monument”

“Proposal for the Generi Building”

“proposal for bridg in Natanya”

“proposal for a fountain”

“Proposal for traffic island in Eilat”

“Proposal for a garden in Jerusalem”

“proposal for memorial in Birkenaw”

proposal for memorial monument in Jerusalem to the Victims of the Helicopters Disaster, 1997.

“Memorial for the Buchenwald Concentration Camp,Proposal,1989.”

“prorosal to the National Competition for the burial site of David and Paula Ben-Gurion in Sde-Boker, Israel,1974”

“proposal for the London Holocaust Memoriol 2017”

I called these series of drawings "The Metaphysical Drawings" as they are free of any effort, intention, style, and cultural dependence. The observer will discover with no difficulty their connections to the totality of my work over the years, especially to the groups of sculptures I called:'' Desert Sculptures '', ‘’The Black System'' and ''Visual Memories''. Like these groups of sculptures, ''The ‘’Metaphysical Drawings'' cross spaces of consciousness, imagination, and mental fluctuations, conduct a dialogue with the cultures of the past and examine themselves with the tools of pure aesthetics. Like the sculptures, they too, try to reach that which is beyond time and place. With minimal means of lines and crayons, they conjure historical memories and fantasize futuristic fantasies. They are none personal, and at the same time, they are the seismograph and the architecture of the oscillations of the soul.
Without intention and effort, they come from somewhere, and I have no choice but to serve them with love and be the vessel that transfers them into the visible world.