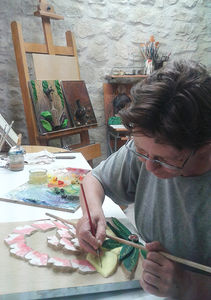 Dolors Simó, Lleida, Catalonia.
-Studies of mural painting in La LLotja, Barcelona.
-Specialist in Mosaic, trencadís style (@mosaic_de_trencadis on Instagram).
-Series exhibited worldwide, to mention: "Conducts-A series about apes" exhibited in Autonomous University of Barcelona and in Château Saint Angheau in Auvergne among others; "Nature and The Human Being" series exhibited in National Art Center in Tokyo and Art Beijing in China among others, "Luk Riuman" series are going to be exhibited in Roccart Gallery in Florence next September and in Dubai in November.

CONDUCTS-A SERIES ABOUT APES (@margotsimi on Instagram)
This series is based on the expressive and psychological study about human behaviours regarding feelings and habits in front of a trouble or subject matter of our own, individual or collective.
Based on apes’ expressiveness, the author brings us closer to our own physical expression so that we realise how human beings and their ancestors are alike.
The artist chose to make this analysis from shapes of apes for different reasons:
-The apes’ expressiveness offers unlimited ways to resolve concepts related to persons.
-Anthropologically there is a close connection between apes and human beings. For that reason the artist considers that our actions and theirs are similar, with the difference that we are conscious of and responsible for our actions. This entails a double proposal: when we do something which is apparent in a gesture or expression, are we deep down like them or are we beyond them?
The author has worked on the images with the utmost respect being grateful for the possibilities of content they offer. If we identify ourselves with one of the images and observe our own attitude we can always think that the paintings depict apes, so we have to look at them from the distance of a work of art and not from an offence.
Moreover, the artist pays a tribute to apes by means of raising the question of how we respond to our ancestors as rational people we are.
The exhibition is made up of three pictorial sections:
1-The Works.Basically, the representation of faces and hands assures that the particular evocative idea arrives to the spectator directly. The attitudes, captured through the artist’ s look, not only are the result of several detailed observations, but also all the experience collected: during 20 years she has taught drawing, painting, mosaics, etc. to a great deal of people who have given life to many expressions impossible to ignore because of their unique character and at the same time common in humanity.
-Psychological part: investigation and understanding of human psychology successfully progressed last century.
The exhibition shows the instant when a physical expression such as a glance or gesture expresses this hidden inner part of human being that controls our attitudes.
1-Expressiveness: Plane or volume, the colour stripes and their forms helps us understand each specific idea, which is expressed through an accurate chromatic separation.
2-There are some works that contain both images and text. This is deliberate because of the works’ special features, so the writings underline and delight those specific values. One example of this is We fill the emptiness with words but we are the real emptiness.
3-Little canvas.The one hundred little canvases made up of images and poems are an anthological compilation of the author’s thought about human life. She tried to join expressiveness with literature to stress and empower the general meaning of the works.
This series which is composed by more than 250 works and 100 little canvas with poems and writings, belongs to a study that began in 2004 and it is not finished yet due to human expression is unlimited.It is expected to express many of the ideas we may live directly, specially those conducts that could be considered main or majority.

NATURE AND THE HUMAN BEING Series (@theo_human on Instagram)
This collection comprises the analytical premise of human behaviour, which is the main focus of the author. This time, the work is placed in the context of the materials coming from nature. There is an overlap implied that led to the search for natural materials such as stones, bones or ceramic from different centuries. There is also work with other materials, like glazed ceramics, to express nature in movement and its forms. The human figure appears later, building a figure-background world, as a piece in the natural space in which the idea of the work is explained. The lack of proportion in the figures comes from the real concept of the size of the natural world as compared to the, also real, size and time of human beings on Earth. As usual in the author’s works, a sense of humour is present in this collection. The mixture of materials, the meaning they have and the usage or bad usage we give them, sometimes make us wonder about how we are or how we behave in natural spaces with a functioning of their own, far from the consequences of human intervention. Therefore, there is also a mixture of our loftiness and nature’s loftiness.

LUK RIUMAN Series-Desimolinestyle (@luk_riuman on Instagram)
This collection is about the study of the human being behaviour, its own nature and this one in front of the void of time and space.

“The hands that guide the World-II”