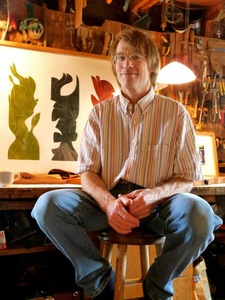 Aaron T Brown, born in New Hampshire in 1955, is known for his large-scale steel sculpture and his printmaking.Brown is artist, writer, musician and part scientist. His Great grandfather William McDougal, who took William James’s chair at Harvard University passed on a few of his genes, as Brown spent an entire summer studying the mud dauber wasps that make their home in his open air studio, only to find out at the end of the summer that his great grand father had studied and written extensively about the wasps 85 years earlier coming to some radical conclusions about the nature of insect intelligence, observing that the wasps were indeed learning in order to survive, and did not merely rely on instinct alone.Brown is working on large-scale steel sculpture as of 2012. He is still actively engaged in printmaking and here in the studio the sculpture forms are born. He resides in New Hampshire with his wife and works out of his studio there.