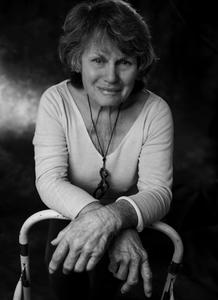 I am a sculptor and a woman creating from a deep personal commitment to the
awakening of feminine energy to all that it is designed to be. Believing in the potential of the clay to respond and excited by my journey into the mystery of what is, I have asked the clay to reveal the form of women in full celebration of their life-force.

As an artist, I have sought an expression of value for my life and to all of life worthy of the attention and the energy I would give it. Awakening women to full awareness of themselves became my purpose and stimulated every action with the clay. I have asked the clay to reveal the forms that would excite women to rise to a higher vibration of their own realities. I have sought to discover the form in clay that would motivate women to move beyond limitations into full celebration of themselves and life. This work, my work in clay, is the reward of my own life.

These sculptural forms of women in the height of their energy are manifest through me as I remember my own connection to the divine feminine and seek to bring forth in all women the truth of who they are and what they must do. During a vision-quest to Greece, I sunk my roots deeply into pre-history, the time before Zeus when the Goddess was the central deity. I learned on a cellular level in my own body what had been taken away and what must be added back if women are to play the role waiting them in healing the planet and all its children: Feminine Energy.

I have prepared a written statement of my findings from ceremonial and sculptural work in my book, Reclaiming the Sacred Source: The Ancient Power and Wisdom of Women’s Sexuality. It is my intention to establish a way forward in which the gift of sexuality will be enacted as the magical treasure given when life is given in order that humanity will always celebrate itself and each other.

A sculptor for forty years, I have taught for over thirty at the college and university level and shown my sculpture throughout the United States, in Japan, in France, in Italy, in Luxemburg, and in South Africa. These sculptures have won many awards and been the subject of many media reviews, and I have frequently been invited for television interviews. I have traveled with my work to gatherings celebrating feminine spirituality; created ceremonial experiences for women and men of the re-emerging feminine; and recalled the sacredness of sexuality in workshops for women in numerous locations across the United States (including Hawaii) and South Africa. I live in Southern California.

I have studied and participated in and led Native American transformational ceremonies for forty years. They have informed my life and my sculpture. As a tribute to the awakening of sexually traumatized women in the transformational ceremonies I have formed in clay (then bronze) the antidote: women in celebration of their own inner perfection and joy. That sculptural work developed into a full study and as book about the sacredness and power of women's sexuality, what happened to it, and how it might be recovered. More recently, I have worked on a series representing the ways in which our culture enacts love, positively and negatively: "Love, What's it to Ya?" Lately, I have been working on a ceramic series: "Where is Love?"
My work has been exhibited across the United States, in France, in Italy, in Luxemburg, Japan, and South Africa. It has been awarded many prizes. The Museum of Art in Ventura hosted a retrospective in 2019.

One of a series of ecstatic female figures expressing the idea that a full sexual experience unlocks he capacity to celebrate life fully.

Additional example of the feminine remembering to celebrate itself.

Angelina is engaging in the height of her own energy as a celebration of her life.