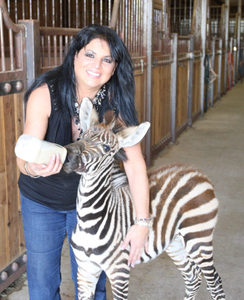 Cher Anderson is a wildlife artist, fine art photographer and jewelry designer who was born in Kingston, New York, lived her youth in Mexico City and now resides in Chandler, Arizona where her art studio is located and she pursues her lifelong goal of being an accomplished artist.

She began experimenting with drawing and watercolor painting at the age of 16 and was determined to be able to produce quality art regardless of any instruction. During her high school years, she entered a watercolor painting into a competition for Black History Month and won first place in the city of El Paso, Texas. Soon after she started studying what at the time was known as Commercial Art and graduated high school fully employed as a designer of logos for a large sportswear firm. For two years she designed logos for NFL teams, Celebrity Golf Tournaments, Country Clubs around the United States, University Sport Teams and many others.

In 1985, she was accepted into the Kermezzar, a juried art exhibit in El Paso, Texas, where she proceeded to sell 80% of her exhibit. At this time her subjects were he female figure and animals with the focus being in their eyes. Her technique had evolved into painting with mixed media of pastels, pencils and watercolors on a variety of textures.

During the following years she had several one-woman shows sponsored by banks, community centers and galleries.

In 1988, Cher was honored by an invitation by the government of Chihuahua city, Mexico, to exhibit in a one -woman show, which took place that year.

At the end of 1989, Cher and her son, at the time 4 years old, relocated to Scottsdale, Arizona and Cher decided to use her talent in a practical way and enrolled in the Collins Institute for Graphic Design. Within 13 month she accomplished graduating with honors and an Associates degree in Graphic Design and Advertising. She was immediately employed by Larry John Wright Advertising Agency in Mesa, Arizona where she worked for a couple of years before deciding to start her own graphic design firm to be able to raise her young son and have work flexibility. Very soon, it became successful and had too much work and not enough time to do it all. In 1994, one of her largest clients offered to hire her in-house to work directly with their clientele. That decision was life changing and launched the beginning of the rest of her life.

For the next 6 years, Cher designed labels for nutritional products, did all the magazine ads and any other form of advertising, created catalogues, brochures, magazines for print and publication.

Beginning in 1998, Cher Anderson (at the time Camhi) began dating John Anderson, her employer who then sold his nutritional supplement manufacturing plant for which she worked and attempted to retired.

In the year 2000, she applied and was accepted to the Art-A-Fair, a prestigious annual art exhibit that lasted the entire summer in Laguna Beach, California. John and Cher temporarily relocated to Laguna Beach and participated in that amazing show. Once it was done, they returned to Arizona and began their adventure in building one of the largest multi-level marketing companies in the world, Isagenix International. Founded in March of 2002, Isagenix has grown to international proportions and is currently located in 14 countries. The initial years were extremely hard working and busy. Cher was the sole graphic designer for the entire company requiring long hours of work and little time for her fine art but well worth the efforts. Full of challenges and learning on a daily basis the company grew, as did the responsibilities, which now involved large convention planning, travelling with the Founder and Formulator John Anderson, and on May 2, 2004, becoming his wife.

Within 2 years of founding Isagenix, John required a kidney transplant and due to his health had to step down from the every day responsibility of running the very large company and sold Isagenix to his co-founders.

This life-changing event allowed for new adventures and time to return to painting. Through research, Cher found out about a workshop for wildlife artists which would be held in Kalispell, Montana and although she had never once painted with acrylic media created her first photo-realistic painting to present during the workshop.

During this workshop taught by Terry Issac and Susan Labouri, Cher realized that this would be the path she would follow to perfect her skills. She studied many of the masters like Carl Brenders, Robert Bateman, and John Seery-Lester to be able to learn technique, style and the ability to paint extremely realistic paintings. She already was an avid photographer and now her focus became wildlife. The experience of meeting her subjects and then creating a painting that portrayed a fleeting moment captured was the ultimate experience. The Andersons now married almost 13 years have travelled the world and Cher has had the opportunity to photograph wildlife in many hidden corners of this incredible earth. Their passion for animals does not stop there; they own a ranch in Chandler Arizona where they have created an amazing environment for raising zebras, giraffes and horses along with other livestock. They have been key in discovering reasons for ailments in giraffes around the world and were the first ever to vaccinate their giraffes for West Nile Virus which ha been discovered to claim the lives of giraffes around the world in zoos and wildlife parks. John and Cher have also rescued giraffes and provided them with health care and good nutrition so they can live their lives happy and healthy.

During these years, Cher discovered a passion for jewelry making which she added to her creative portfolio. Through her travels, she buys materials to make her one of-a-kind creations, which represent different aspects in nature. These beautiful necklaces are comprised of natural beads, gemstones, sterling silver, fossils, and hundreds of other materials. Her necklaces have sold to women around the world through conventions and private showings.

In December of 2016, John and an amazing team, put together an art exhibit featuring Cher’s lifelong works of art including, original paintings, over 80 wildlife and nature photographs, 30 fine art photographs, and a fashion show that rivaled Victoria Secret’s for her line of one-of-a-kind, handmade
necklaces.

The incredible event titled “Essence of Beauty” drew over 500 people who travelled from all corners of the United States, Mexico, Canada, Puerto Rico and even Australia.

Cher’s commitment to her art, the natural world and her passion for animals has driven her to teach herself everything she has needed and continues to need to be the creative artist she desires to become.

The content of this portfolio is fine art photography. Output in various finishes, museum mounted, on metallic paper or satin finish. Some are protected with Acrylic up to 1/4" thick, others are laminated.