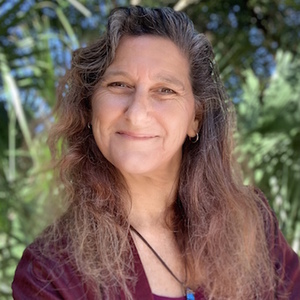 Bonnie has a BA from Hofstra University in Set Design and Graphics, along with her AA from Valencia Community College in Fine Art. Areas of study include, oil painting, two to three dimensional design, photography, with focus on theatrical makeup and set design.

Bonnie Sprung has over 20 years experience in curating, judging various art exhibits along with judging high school thespian competitions. She is a member of the Women’s Caucus For Art and is a past president of the Florida chapter. She is also a Seminole Cultural Arts Council board member.

Bonnie’s award-winning fine art including, paintings, mixed media, and photography, has been exhibited in numerous solo and group shows. Her photography has been chosen and published in two books for United Arts of Central Florida Red Chair Project. Her work is in galleries and in public and private collections. Bonnie has done set design, scenic painting, make-up and stage management for over 150 shows locally and in New York. Since 1986 she has owned Uniquely Sprung Art and Photography Studio and Muscular Motion Gym. In 2000, Bonnie was introduced to public art and since has created designs for lizards, swans, butterflies, clowns, gators and geckos. Aside from designing sets and many art exhibitions, Bonnie creates and sells wearable art. She is also in demand for her mixed media art demos and workshops.

Being green, Bonnie transforms CD and DVD’s into works of art. Canvas is glued and trimmed to each individual disk then painted randomly with acrylic colors. Handwritten; using dimensional fabric paints are TV/Movie/Theatre titles and quotes. The disks are also layered to give the faces some depth, using different widths of cut wooden dowels. The portraits are finished with a two to three color oil paint.
In addition to using the disks, I have also used the cases. Painting in and on quotes and images pertaining to the celebrity.

Albert Einstein (14 March 1879 – 18 April 1955) was a German-born theoretical physicist.[5] Einstein developed the theory of relativity, one of the two pillars of modern physics (alongside quantum mechanics).[4][6]:274 Einstein's work is also known for its influence on the philosophy of science.[7][8] Einstein is best known by the general public for his mass–energy equivalence formula E = mc2 (which has been dubbed "the world's most famous equation").

Famed actress, award-winning comedian, television host and human rights advocate Whoopi Goldberg was born Caryn Elaine Johnson on November 13, 1955.
She starred in a popular one-woman production in 1983, and in 1985 she won a Grammy Award for Best Comedy Recording. That year, Goldberg's success with The Color Purple launched a highly visible acting career. Since 1985, she has appeared in more than 80 film and television productions. She won an Academy Award in 1991 for her performance in Ghost and a Tony Award in 2002 for Thoroughly Modern Millie. In 2007 she embarked on a lengthy run as moderator of the TV talk show The View; winning a Daytime Emmy Award in 2009.
Known as an EGOT winner. She is one of twelve who has the honor of winning all four major annual American entertainment awards in a competitive, individual (non-group) category: the Emmy, Grammy, Oscar, and Tony.

Ruth Bader Ginsburg, born Joan Ruth Bader; March 15, 1933) is an American lawyer and jurist who is an Associate Justice of the U.S. Supreme Court. Ginsburg was appointed by President Bill Clinton and took the oath of office on August 10, 1993. She is the second female justice (after Sandra Day O'Connor) of four to be confirmed to the court (along with Sonia Sotomayor and Elena Kagan, who are still serving).

Laurel and Hardy were a comedy duo act during the early Classical Hollywood era of American cinema. The team was composed of Englishman Stan Laurel (1890–1965) and American Oliver Hardy (1892–1957). They became well known during the late 1920s to the mid-1940s for their slapstick comedy, with Laurel playing the clumsy and childlike friend of the pompous bully Hardy.

Alexander Hamilton (January 11, 1755 or 1757 – July 12, 1804) was an American statesman, politician, legal scholar, military commander, lawyer, banker, and economist. He was one of the Founding Fathers of the United States. He was an influential interpreter and promoter of the U.S. Constitution, as well as the founder of the nation's financial system, the Federalist Party, the United States Coast Guard, and the New York Post newspaper. As the first Secretary of the Treasury, Hamilton was the main author of the economic policies of George Washington's administration. He took the lead in the Federal government's funding of the states' debts, as well as establishing a national bank, a system of tariffs, and friendly trade relations with Britain.

Janis Lyn Joplin (January 19, 1943 – October 4, 1970) was an American singer-songwriter who sang rock, soul and blues music. One of the most successful and widely known rock stars of her era, she was noted for her powerful mezzo-soprano vocals and "electric" stage presence.