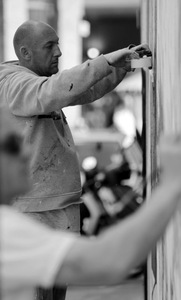 Born in 1973, Richard Shipley hails originally from York, where he became a graffiti artist in his teenage years; now residing in the South West, Richard's artwork has organically evolved into a purely abstract aesthetic, which features in popular culture, private collections and Art exhibitions across the globe.

By embracing the infinite depths and textures of a non-objective and abstracted style, Richard Shipley delves deep into the human psyche where he captures and conveys stolen moments of the emotive experience.

His work immerses the viewer in a conceptual yet soulful representation of the human condition, and subtly invokes whispers of vulnerability and fear.

The canvases are formed through the dynamic layering of ink, aerosol, oil and emulsion, which traverse a labyrinthine expanse of projection and consciousness; and whilst hosting such an authentic and beguiling aesthetic, the viewer becomes engulfed within an assiduous approach to sacred geometry and visual composition.

With an inspired acknowledgment of such pioneers as Boccioni and Lowry, Richard Shipley manifests both depth of movement and emotive expression whilst retaining a crafted economy of rich simplicity.