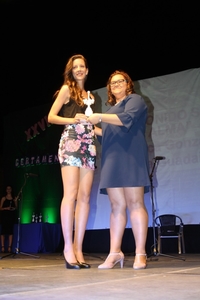 The artist Jessica González Prados has to her credit a degree in Fine Arts (2006-2012, University of Sevilla), a Master in Art: Idea and Production (2012-2014, University of Sevilla) and is a PhD candidate in the program Art and Heritage of the University of Sevilla. Awarded the medal for the best academic record of the Faculty of Fine Arts in Sevilla (Master 2013-2014).
Mrs. González is currently an artistic drawing and painting teacher (Alcalá de Guadaira, Sevilla) and has been accepted as a member in the Research Group of the Drawing Department at the University of Sevilla.
She has recently been selected by the company Hago cosas in the open call called FLAMANTES: "Artists under 35 years", which aims to give visibility to a group of artists from around the world.
Her last solo exhibition took place in the Andalusian Radio&amp;Television headquarters in September 2016.
Was exhibited on differet galleries and International Fair Art in Barcelona, London and France, around seven exhibitons.
Two firts prizes and one honor mention.
Two investigation book publised "Enfoque contemporáneo de los desastres de la guerra" and "Dibujo artístico I. Conocimiento, técnicas y tácticas".