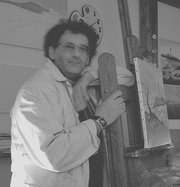 A. Cammarata born in Augusta in 1962 where he lives and works. When he was 11, he found an oil colours' box and so he began his first painting advances. Since 1977 he attended the " Istituto d'Arte di Siracusa" and for some years he works with the Master Tomaselli, an aged painter who transfer him his great love for sicilian traditions.1983: he begins the study over sicilian landscapes. 1985 : his first public exhibition at the Gallery "La Diga" in Siracusa. His Artistic way riched thanks to the important cues offering by a city rich in history as Siracusa is . 1988: Personal exhibition called: "Sicily lights and colours" in Siracusa at " Cripta del Collegio" In 1991 he was invited at "Bidart" international market of Arts in Bergamo. here he meets many big artist with compare himself riching his cultural luggage and receiving many approvals by the " Galleria l'Antenna's director who invited our artist to expose in many itineraring exhibitions in the north Italy. In 1992 Cammarata began a new study over the interiors of the ancient farm testifing the agricoltural traditions of Sicilian people. This works will have many approvals in a National exhibition in Piacenza and earn at the painter a third award. Since 1991 until 1998 he is present at the exhibition of Art " Artistic May" in Catania. Where is present the mayor of the city that congratulated with the artist. 1992: Personal exhibition at the "Margutta" Gallery in Siracusa. 1993: Personal exhibition at the "Espressioni d'Arte" Gallery in Siracusa 1994: In this date the artist founded the "Officina d' Arte " to promote the Art in his country and to diffuse the Art between the youngs, he works very hardly for that ever 1996. 1996: He starts a study over the ancient farms called "Masserie" the Academy of Arts' director Prof. Paolo Giansiracusa promotes an exhibition at the Archeoclub in Siracusa to testify the success , also the Academy acquires a work wich is exposed inside. 1997:Personal exhibition at " Fanciulli" Gallery in Latina. 1998 and 1999 Personal exhibition at "Espressioni d'Arte" Gallery in Siracusa. Many works of the artist are acquired by the Municipality of : Augusta, Butera, Mineo, Leonforte, Solarino,Vizzini and Reggio Calabria. The works are present also in private colletions in Italy, France, Germany,USA, Greece and Malta. Write of his : L'elite, Top Art , Mondadori, L'altra Cultura, Archivio and Giornale di Sicilia. Also Prof. Raffaele Degrada (national art-critic) interessed of Cammarata's works. 30 December 1999 "Italian Tribune" the American weekly journal made an article about his newest collection entitled "Mediterranean Light"

Cammarata has exposed also in the USA, in the following exhibitions:

The Painter in directed on Web

Antonino Cammarata, sicilian painter, has put a webcam in real time, in his Art studio in Augusta, from which it is possible see to paint him in direct for approximately 10 hours to the day; all this in order to discover the secrets of the painting birth. It's the first and only webcam in real time to the world put in a painter's study, it's linked on beyond 350 websites. The painter asserts: "I'm happy that the universe of Internet can make me to enter in the houses of all the world because I succeed therefore to carry that sun beam that give off my landscapes of the South". The artist Cammarata therefore also has created risen of "virtual painting School on linens" but he asserts: I do not want to teach nothing on the painting neither to be the master of nobody, but I offer the opportunity to acquire of the visual information observing me to paint in direct. This is an only occasion that I grant to you, accommodating to you virtually in directed in my study. Cammarata hopes also that many young people seeing to paint it in direct approach themselves this beautifulst one and fascinating creative Art. This is the Cammarata painter's website: www.arteindiretta.info