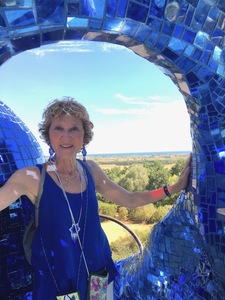 Nan is an optimistic, energetic person whose works are stylized, yet recognizable, vibrantly colorful, often, intricate, playful, enlivening, and upbeat.

Nan is one of the founders of the Danforth Museum of Art and teaches there as well as at the Worcester Art Museum. Since 1999, Nan has taught workshops in France, Italy, Greece and Mexico. She has run the “Artists Loft” on the Oceania Cruise Line in the Mediterranean, the Baltic States, the Caribbean, Australia, New Zealand and South America.

Nan has a BFA, an MA, and an MFA in painting and has had 53 one-person shows, numerous museum exhibits, and received many awards. Her work is represented in collections in six countries.

In the Floating World

This group of paintings and mixed-media works were done this past year after I returned from a trip to Japan. I did not know what works I would create once home, but I began drawing on my small sketchpad on the airplane of the images in my head that I just experienced. I also looked at the small souvenirs I bought to give as gifts, such as small coasters in the shape of kimonos, colorful fans, and handkerchiefs. Once back in the studio, I created dreamlike compositions using some of the most pleasurable aspects of the culture: geishas wearing their kimonos, or the kimonos and fans themselves, along with buddhas, shrines, birds, and fish. I also called this series, "In the Floating World" partly because many of these elements in the paintings seem to be floating, but also because the original Floating World referred to the extravagant and stylish luxury of the Edo period (1615-1868), and I wanted to capture the array of rich sensory experiences through my own designs and flights of fancy.

“The Pond Below the Shrine”

This is a made-up scene of my memory of a Japanese Shrine by a pond of made up birds and fish. All my oils on cradled panel of this series are 28" x 22".

This is one of my Japanese Floating World oils where we see the dream of this lovely world of symbols through the geishas eyes. 28" x 22"

The shrine and the pond and the many birds are also seen through the eyes of a made-up princess I called Akane, after our lovely Japanese guide.
28" x 22"

“Treasures of the Floating World”

This oil painting is a design of the symbols I took back from my trip including many types of fans, birds, and kimonos. 28" x 22" oil on cradled panel

“Lost in the Dream of the Floating World”

In this oil painting, the geisha is part of one of the kimonos and is floating within all the beautiful symbols of their culture, especially from the Edo period.
Fish swim or fly and it doesn't matter in this dream world. 28" x 22"

“Friends in the Floating World”

Here too we see the floating world symbols of a luxurious time through the eyes of the two geishas. 28" x 22"

Here are the lovely symbols of the kimonos, fans, and fish as seen or dreamt about by the baby buddhas or little monks. 28" x 22"

“Fantasia with Birds and Fish”

After I did the oils, I switched to making mixed-media works on claybord of the same compositions, 24" x 18". Because Of using three mediums instead of oil paint, the results are different.

“So Many Choices for the Fish”

“The Pond Below the Shrine II”

This is a mixed-media take-off of the oil painting of the same name. It is done with Caran d;ache crayons, oil sticks, and watercolor. 24" x 18"

“Friends in the Floating World II”

This mixed-media work is a take-off from the oil painting of the same name. It is interesting how the materials act as a resist (oil and water) creating an interesting texture. 24" x 18"