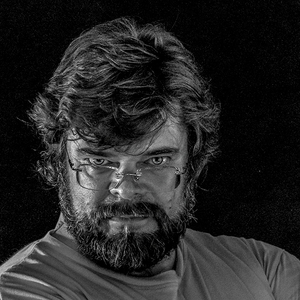 A universe of subtle emotions, always expressed through an impeccable technique and the meticulous choice of supports. The innate gift of knowing how to capture elegance through light that gently reveals sinuous roundness makes McMuller's visual narrative an exploration of sensations, feelings, states of mind: this is how passion, elegance, through his shots sensuality is personified by beautiful women whose features are often only hinted at, but whose character breaks up and excites. Even when the grave accent of violence on women becomes part of his register he does it with subtle wit and gives an image of the woman at the same time aware, intelligent and proud.
Born and raised in Italy in 1966, he has been a photographer since childhood.
His artistic language is characterized by the inputs he receives as a child from his cosmopolitan family: precision, cheerfulness, creativity and the ability to grasp the beauty everywhere stress its marked sensitivity. Despite the technical studies McMuller shoots for pleasure until 2011. The innate artistic vein is revealed in recent years through the elaboration of art photographs resulting from studies and experiments, whose value is recognized in the prizes received during the events of 'National and international art to which he is now invited. The main active projects are "McBlack", "McColor" and "McWhite", expressions of research on Aesthetics, Significances and the Essence of the female body, and the indispensable "Life Always Wins".
Dr. Leonarda Zappulla, art critic

In the gallery McBlack by McMuller, black is not a color that covers or hides, but on the contrary it is a blackboard, a background from which maliciously and elegantly emerge the sinuous looks of the female body with the precise intent to deceive the senses, to seduce the mind and thus to leave their mark in the imagination of those who observe them.

Shoots from my endless travel

“It's time to come back”

“Sunrise in open sea of Alicudi”

Midnight in the Ionio's coast

“Hold on to Lava”

There is a lonely beauty thing in all the Tate, and this is. Out, of course.

New pictures that cannot enter in McBlack because there is one color in the shoot and it is not b&w. But they could be wonderful anyway.

Taken in May 2018 in Prato, (Tuscany, Italy) with Nikon D850 and original Nikon 85mm lens, minimal post-production for the management of shades and preparation for printing.
As for the image, it shows us a young, decidedly young girl, who shows herself shy and demure by hiding her graces behind her hat.
But the stocking is fishnet, the hands hold the hat with a soft grip, without any nervousness and the step is decided, completely lacking in terms of fears or hesitations.
Delicate and tremendously sensual, it gives us a sweet and classy image that has the intent to entice men and inspire girls.

In this shot it manifests itself in the infinite sweetness of the busty Roman model Sara Giustinelli and in the exclusive antiqued print, made by an Italian laboratory whose technicians work with white gloves (not to say so).

The printing system is such that the support cracks in a short time, obtaining a painting very similar to the period paintings even though they started from a digital shot.

The frame is also antiquated and the edges of the work are protected by handmade wrapping paper, as was normally done to protect the frame and painting.

In light of the quotations reached, the artist has decided to create a single copy for the entire planet and soon the video of the destruction of the file and of the printing proofs will be available, certifying the absolute uniqueness of this Work of Art. .

This shot has the distinction of coming from my "first time". ... in the pose room, I mean. Little postproduction, oriented to the color and skin management of the model but very difficult to print because the difference in brightness between the hair and the background is less than 5% and it is a moment that the head is no longer visible. On the third attempt, we usually succeed and a picture emerges that has received critical favors.
Limited edition, as for all works in the Mc series with 7 + 1 copies.