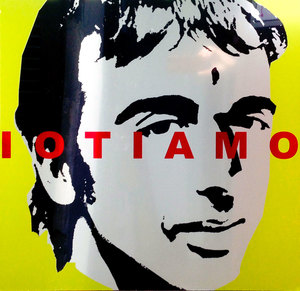 Antonio Spanedda, born in Novara in 1961, graduated in visual arts and received his doctorate in Sacred Art at the Accademia di Belle Arti Brera (Fine Arts Academy) in Milan. From 2002 to 2004 he worked on a cycle of works in aluminum and steel made with innovative technological procedures.

He created the piece “Un Uomo Giusto” (A Righteous Man) and presented it to the public on March 31, 2004 in the "Sacro Volto" Church in Milan. In 2005, he participated in a contemporary art exhibit called "Già e non ancora...”, a side event part of the Venice Biennale with he piece “Ambone, Casa della Parola” (Ambo, House of Words) which is permanently on display at the San Lio Church in Venice.

In 2006, he painted a number of pieces dedicated to the "Anime Giuste” (righteous souls) for the Arte Cristiana Contemporanea project, the “libro sacro” (sacred book) for Sant'Orso on display at the Priory of Sant'Orso in Aosta and the reliquary for San Raimondo on permanent display at the Suore Cistercensi di Nazareth Church in Piacenza.
In 2010, the artistic project IOTIAMO, which focuses on the idea of Love, was developed.

He has received theatrical training at the C.I.T.A. Laboratory in Novara.
In 1990, he took part in the "Festival & Festival" exhibition and presented his spray paint performance.
In 1993, as an actor, he appeared on different television programs on national television and worked in the theater with Guido Gagliardi. With the intellectual and expressive Aurelio Gentile, he began a constructive and stable partnership through a series of exhibitions with installations, videos and locations not typical to the art world.
In 1996, he founded the Argilla group which brings together the experiences of different authors and have developed artistic and theatrical performances. They've worked with the Stalker in Turin on several projects, including Michelangelo Pistoletto's Cittadellarte, the Festival of the Arts in Biella and the RAIII project, Rete d’Arte Internet Interdisciplinare Indipendente (Independent Interdisciplinary Internet Art Network).
In 1998, he participated in the Civitavideo art video exhibit and in 1999, in the Dietikon Video Festival. He also took part in a visual art exhibit in Rome with Vettor Pisani, Giosetta Fioroni, Fabio Mauri and Luca Maria Patella. He has organized performances for the Argilla group in different cities: Piacenza, Varese, Milan, Borgosesia, Vercelli, Novara, Turin ... with "amore fraterno (brotherly love)", "lo spazio vissuto (living space)", "via crucis (way of the Cross)", "essere umani (human beings)" ...
He designed and created a tv laboratory, a post-modern artistic adventure from which television programs have been developed. And he is also one of the founders of the ASC contemporarysacredart portal; the place where all world religions meet.

IOTIAMO is the name for the new project developed by the artist Antonio Spanedda. It represents a clear statement of hope for future generations; a project which characterizes the thought and quality expression of the artist.
Together with people who share and underwrite the Human Rights Declaration of Love, Spanedda launches a positive message to young people in this time dominated by idols and wars, where love is a useful ingredient for building a better future.

Antonio Spanedda creates portraits with other artists of those individuals who sign the Human Rights Declaration of Love with an innovative style of great aesthetic and emotional effect.

Brotherhood, friendship and love, society's sacred and fundamental values, are depicted by the written words, IOTIAMO which dominate each painting. The portraits become works of art as they are finished during “live” artistic performances in which Antonio uses different techniques.

Change in a world without feelings comes from the hope of a transformation of such through a declaration of love and a contemporary art project.

To carry out this change, necessary for future generations, first of all, one needs to change his/her way of loving. Leave behind the loneliness of a closed society and individualism, where the loss of a loving contact has been replaced by neglectful and instrumental relationships.

New generations must take the first steps along this journey; learn to love generously and patiently.

Together with people who share and underwrite the Human Rights Declaration of Love, Spanedda launches a positive message to young people in this time dominated by idols and wars, where love is a useful ingredient for building a better future.

The network of the Enterprises is free and is constituted by the Testimonials and artists that believe in an ethical and economic development of the art and the culture.

The IOTIAMO project, from an artistic point of view, presents a series of works grouped into COLLECTIONS for the spreading of a "positive”, cultural, and visual art message.

A contemporary art project where young people are inventors of their own future, players and spectators future actors. With the artistic project "IOTIAMO 2045 Time Capsule", I wanted to record the reality of this period dominated by unrelenting processes of transformation so as to give student's of the future a glimpse of man's identity and historical memory at the turn-of-the-century.
With the creative workshops in the schools, I have met many young people and have found out that many of them still believe in love, in the love for life, for parents and friends. They pay a lot of attention to people, diversity and the environment as well as being able to invent new languages and are extremely creative. They are the first global generation with convergent values and ways of thinking, and this is why they need social recognition.
Together with them, I have placed the first brick of this art project will see light on Saturday, May 21, 2016 with the laying of the capsule at the School in Novara and once again in the near future, in 2045 with the opening and a dedicated event.
The capsule was recorded at Oglethorpe College The International Time Capsule Society in Atlanta U.S.A.