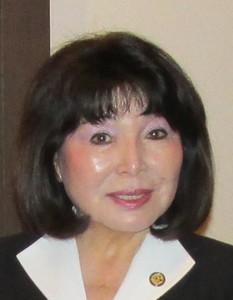 Soo Cha Griffith is an internationally known artist now living in Knoxville, Tennessee. She attended New Mexico State University and has a diploma from the Platien Art Academy in Europe. She is also a former member of the Korea National Committee of International Fine Arts Association.

She lived in Europe for several years where she had the opportunity to travel extensively throughout France and Italy as well as other European countries. She often painted on location outdoors. The simple beauty and the old architecture of quaint villages and the splendor of the European countryside overwhelmed her with inspiration and her artistic talents flourished. Since moving to Knoxville, she travels back to Europe to paint on location every chance she has. She loves to paint “old world” scenes and landmarks.

She paints in any medium, but uses mostly oils and acrylics on canvas. Her emphasis is on quality in her paintings. She loves to paint in the light impressionist image which provides considerable detail of the subject. The colors used throughout her canvas compositions are vibrant and appealing to the eyes. Her paintings give the viewer feelings of happiness, harmony and serenity.

Her compositions are composed mostly of towns, streets, landmarks, coastal areas, open meadows and gardens. She also paints portraits and commissioned paintings for clients. Each year, she tries to travel to different countries and locations to paint scenes in those areas. People like her work because they feel at some time and somewhere, they have been at a particular place in her paintings.

She has been selected as Artist of the Month at the Arts Depot in Abingdon, Virginia; the Arts Council of Knoxville and twice at the Oak Ridge, TN Museum of Art. She was selected by the Arts Council of Knoxville to exhibit her work at the Knoxville Museum of Art where 16 major artists from the region were represented. She was also selected to exhibit her work in the juried Exhibition Exchange between the cities of Knoxville and Greensboro, NC. Her paintings have been exhibited at the Art Expo in New York City represented by LIZ-Beth Fine Art Publishing Company. She was a City of Knoxville Mayor’s Art Gala individual artist award nominee and has been jury selected several times as a Dogwoods Art Festival exhibitor at the Tennessee Valley Authority (TVA) headquarters in Knoxville. In 2006 her colorful painting “Red Poppies” was used in promoting the Knoxville Museum of Art Artscapes event. The painting was a popular item at the auction and Her painting of Ventebren, France now hangs in the Ventebren Mayor’s office.

She also exhibited at the Parallax Art Fair held in London, England in May of 2014. Three of the paintings were collected by British Petroleum oil executives.

You can also see several more of my paintings if you do a google search of (Soo Cha Griffith artist).

Painting of the coast of Marsailles, France

Painting of the Sunday market at Aix-En-Provence in southern France.

“Autumn in the Smoky Mountains”

Monthly Meeting of the Red Hat Society for fund raising.

Street cafe near the Arc de Triumph in Paris.