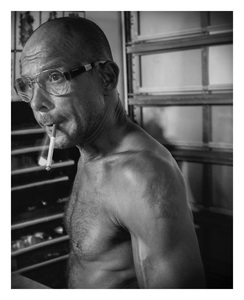 BALANCING THE SPIRITUAL AND THE MATERIAL: THE ART OF CARLOS CESÁR ALVES
David S. Rubin
​In both life and art, Carlos Cesar Alves maintains a harmonious balance between the physical world of daily experience and the spiritual domains of faith, ritual, and belief in something greater than our time on earth. Because he was born colorblind, Alves never imagined when he was young that he would one day take up painting. In his late-teens and twenties, he followed his spiritual leanings and became a priest in the African-American religion Candomblé, which originated in Salvador and is today practiced mainly in Brazil. After seven years of priesthood, Alves ultimately felt uncomfortable in the role of spiritual leader, so he took a 180-degree turn and entered the business world, serving first as Financial Director for the Brazilian branch of General Motors and then, upon moving to the United States, as Project Manager for Operations and Technology at Citibank. By the time he reached his early forties, Alves was successful in the corporate world, but he now felt a spiritual void. By happenstance, such urges would soon be satisfied by yet another career change.
​In 2006, Alves bought a condominium and thought he would fill the walls with art. After discovering that offerings in Miami's Design District exceeded his financial capabilities, he decided that it would be more economical to make his own paintings. Knowing that this might be challenging because he can see only in black-and-white, he decided to rely on faith. Much to his surprise, when he installed his first paintings in his new digs and held an open house, a Miami gallery owner was impressed enough to invite Alves to participate in a group show. Since that first exhibition, where the artist hit the ground running, he has continued to develop and hone his art practice, which has allowed him to return to a spiritual life without forsaking connections to the material world.
​For Alves, making art is akin to a daily religious practice that is usually performed at night. To begin a painting, Alves blesses a canvas by inscribing a personal sacred symbol on the reverse side using a transparent liquid oil-based medium. He then kneels before a blank canvas, communing in his own way with the cosmos as he awaits inspiration. Although some of the paintings develop intuitively, others result from a more calculating process. His more painterly works, for example, rely upon his emotional impulses, while his geometric configurations reveal his more rational side, as well as his extensive experience with mathematics. He also uses his left-brain analytical skills for color coding the shades of gray that he perceives, although, through a seemingly mystical sixth sense, he is often able to decipher the color orange.
​Alves' oeuvre includes several ongoing series of paintings. Built up from a variety of common materials, the geometric grids in the relief paintings of the Friends series suggest architectural structures and represent logic and order. While a grid is also present in the Moods series, where small individual paintings are organized to simulate a quilt, gestural brushwork and diverse colors animate each unit, transforming it into an expressive record of a momentary emotional state or psychological temperament. For the Dimensions series, Alves uses an Abstract Expressionist approach to produce painterly abstractions that suggest the infinite expanses of cosmic space. Rounding out the repertoire is the Perception series, emotionally charged semi-abstractions. Distinguished by symbolically ambiguous imagery, these paintings invite viewers to find in them their personal stories and meanings.

My sister was diagnosed with cancer in 2011. My painting ‘Bada Re-Born’ is a
tribute to her. Bada is my sister’s nickname and this painting tells the story of her
journey from disease to renewed health.
This painting which is 72 inches x 72 inches is on exhibition at the Opera Gallery
in Miami, Florida. It is a mixed medium geometric piece. I used nails as a
metaphor speaking to my sister’s pain as being analogous to the pain of Christ
during his crucifixion. Piano wire, tape, acrylic paint and epoxy resin are layered
over a wood base to enhance the composition and highlight the 3D effect.
The painting is divided into four sections representing the stages of my sister’s
transformation.
In the first section of the painting I use nails pointing downwards for the staircase
and railing to represent my sister’s pain for having been “nailed to the cross.” At
the top of the staircase is a fragile house that for me signifies the unexpected
nature of her diagnosis. The little girl figures running up and down the steps
symbolize all the time my sister needed to spend searching for a cure for her
cancer.
In the second and third sections of the painting the little girl figures appearing to
move from one place to another represent the amount of time taken up by my
sister’s treatment. Additionally, the little girl figures in red and white symbolize her
red and white blood cells that required constant monitoring because of her
susceptibility to infection. The arch at the top of the third section, done in nails,
was to depict a helmet used by a warrior as a symbol of my sister’s strength,
courage and resilience during the months she was receiving radiation and
chemotherapy treatment.
In the final section of the painting there appears another staircase leading to a
stronger, sturdier house. The little girl figures coming down the steps are happier
now. They are celebrating my sister’s victory over her cancer. Notice that the
railing of the staircase in this section is done with bigger nails pointing upwards
indicating that the battle has been won and my sister is finally cancer free.
Lastly, the stripes I placed on the white background separating the sections
represent faith, purity, blessings and hope. The millions of symmetrical dots that
cover these stripes from top to bottom each one represent my prayers, my faith
and my asking God to cure my sister from this terrible disease… God must have
heard my prayers along with many others as my sister is completely cured.
We truly have to thank the doctors for their amazing work, but too, we must
acknowledge that faith is a powerful instrument for making miracles.