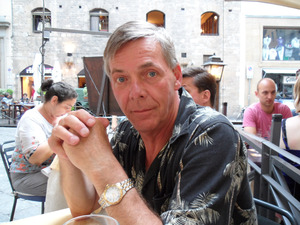 CV Richard R. Alm
I am still a practicing designer, painter, sculptor and digital print maker having received my BA from the University of Saskatchewan class of 1967.
As a fine arts undergraduate, I studied under several of Canada's leading painters and sculptors including Eli Bornstein, Otto Rogers, Ernst Lindner, Robert Murray & William Epp.
The intervening 40 years was a worldwide journey in the communication and design community creating everything from new products and advertising to world fair exhibits.
Today I continue to paint when I'm not scanning art & producing giclees for a select group of artists, in my studio overlooking Vancouver's False Creek.
Active Member Federation of Canadian Artists

Alm Mission Statement July 2010:
To explore and enjoy the evolution of my personal style and quality of work by completing 300 acrylic paintings by Aug 4, 2013, with the objective of bringing my artistic skills as a painter to a premium level, with work that is acceptable to better galleries world wide.

Artist Comment
My preferences are landscapes, urban and rural, executed in a realistic style with the occasional portrait to improve my skills in that area. As we are an extension of our experiences, my creations are often influenced by the often rigid rules of the graphic & industrial design industries that was my pre painting life. The canvases do not contain any inner dark feelings or intended to promote some social statement. I've simply tried to capture a moment in time from my ongoing travels, to be enjoyed by others in a bright, sometimes mystical but cheerful way.
The paintings presented for review are a selection of the first 150 completed of the 300. I hope you enjoy them as much as I'm enjoying the process.

My paintings and mixed media have appeared in:

At the advice of Robert Genn I have "gone to my room" to paint 300 small canvases. I completed the 150th piece April 1st 2012 and plan to finish the balance by Aug 2013. The attached images are a selection of the first 150. I hope you enjoy them as much as I'm enjoying the process. To see more,
go to my website https://www.richardalm.ca

Fall in the Shawnessy district of Vancouver

The city of North Charleston, South Carolina has lowlands which are in the process of being reclaimed. 400 yards west of this particular viewpoint is the family resting place of The Honorable Thomas Bee, Attorney General, later Governor of South Carolina, born 1740. A patriot in the War of Independence and a friend of George Washington, Mr. Bee was asked to be Chief Justice of the US Supreme Court just before his death at age 79. The site will be honored by the developer and the city.

Looking south from the southern mansion of the Boone Farm along the rows of Oaks planted in the early 1700s. Boone Farm is the oldest working plantation in America. Prior to the Civil War, it's workers supplied all the bricks to build Fort Sumpter, which became the flashpoint of the war in 1862.

Enjoy the shade of the trees and a sea breeze on a hot summer day in John Lawson Park, West Vancouver BC Canada

Hanging out on the beach by the 14th Street pier in West Vancouver, BC Canada

Vancouver's Granville Island Market is a destination for visitors and locals . Food market, playgrounds for children, restaurants, Art / Theatre and nightlife abound. For me, it's where I walk to to get the groceries.

Royal Roads Military College in Victoria BC Canada is a heritage structure.The grounds, which extend to the waterfront, house a wonderful garden and this marvelous Eukalyptus. One of my favorites and sold immediately.

One of a fleet of transit water taxis, crisscrossing Vancouvers False Creek, landing at The Granville Market.

In the straight between Baffin Island, Canada and Greenland live thousands of small icebergs calved from the melting glaciers.
Hello global warming.

Iceberg hunting near the town of Ilulissat Greenland

What a wonderful city. Vendors near the cruise ship docks, wait patiently for the tourists. A large portion of Istanbul workers hold 2 jobs.

An unknown tree in an unknown street in downtown Santorini, Greece.

Finally, after a million stairs, the top of Mikinos, Greece among the windmills