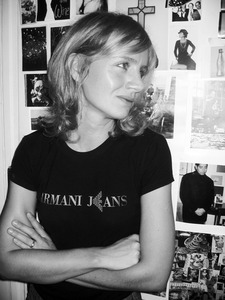 Dusa Jesih was born on 1977 in Ljubljana, Slovenia. She lives and works in Ljubljana, the capital of Slovenia. In 1996 she finished high school of Art, Design and Photography in Ljubljana and in 2003 graduated from Fine Arts on Art house - College for Visual Art, Ljubljana. In 2006 she post graduated in painting. For the present she lives and works little here, little there, in Ljubljana and in village Kal near Pivka, in capital and in the countryside, engaged in painting and printmaking; from classic painting to new media (as a technical support to her work). She participated in numerous exhibitions, colonies, residence programs and projects at home and abroad. Since 2004 she is a member of Community association of Slovenian artists ZDSLU. Since 2006 she is a mentor of art classes on Slovenian university for third life period. From 2006 to 2007 she was twice on expert and research advanced studies in Paris, living in Cite Internationale des arts. From 2008 she has a status of self-employed artist.

»My name is Dusa (which in translation refers to soul) and incidentally I connect a large portion of my existence to the meaning of soul. To me soul is important, is inconceivable, weightless, cannot die, doesn't crease or mould, and doesn’t get moth-eaten - at least not by those real ones. Soul I believe belongs to unearthly extensions; as caretaker of my own soul I try to get well along with it. Sometimes I even »prey for it - and I wish it a heavenly happiness in – haven'. I often think to myself: 'I'd sell my soul to be able to express all I think – that I think, all that I feel all my moods… so that I can get to the heart of the soul and - paint it. But of course, my soul is priceless, is not for sale, does not change according to daily changes of currency value and can not be the matter of stock exchange. Soul is my name and soul is me – Dusha. I repeat the well known mantra - about a rainbowy mixture of - foolishness and pain, I agree with it and I sign it up as Dus(sh)a J(Y)esih. «

“Shape and deformation of shape, gestures, colour and rhythm, that gives forth to my works I don’t try to explain in terms of globalisation, not even as a break with fine art tradition but mostly as an expression of my own inner translation of all that I receipt and that touches me. My main concept is not a naive tendency to change the world but rather an attempt to upgrade my inner development, which pushes on both – my creations, based on emotional level and also the level of my individual searches that are not excluded from the context of social development.” “(Dusa Jesih)
The artists' words point to her engaging work, they point to her ability of fabulating on a surface with elements of painting, drawing and collage, her images "talk" of her ability to avoid imitating function of a subject in reality. But still we can trace it and imagine it when we let ourselves go into a truth of the visual metaphor.
Dusa Jesih does not restrict wideness in her gesture - despite her "Pocket edition in transition", as she likes to call a range of her small images.

Drawing in Slovenia II. 1940-2009
Uncertainty weather Dusa Jesih chosen works in "Pocket edition" are drawings or pictures is redundant. The mosaic of miniature drawings is in fact a series of concluded compositions imbued with dynamic painting emotions. Interplay between painting and drawing elements in her work is a condition for creation of an integrated visual thought, at an organized surface of the paper bases.
Extreme gestural freedom of her creative process is continually being renewed in itself. Coloury saturated structure is held with a neutral line in the core - and vice versa.
In this colourful atmosphere one can often detect presence of figural presence, that lifts from an non formal gesture; and relatively frequently the automated flow of brush movements are stacked together with an uncorrelated range of letters.
Crossing between mimetic and non mimetic threshold in Dusa Jesih's artistic creation is a mode of testing the originality of one’s own painting "manuscript". Colour basis is a step forward to the layers that are dissolving mental stringency into fantasy of image.
All these small inventions of spaces, that are organized in chain of sequences, theatricalise the whole integrated space of imagining - they are much more then fragments of hypothetical landscapes, they are images from beyond of reality, they are imaginary scenes of art space.
Majda Bozeglav Japelj (2010)