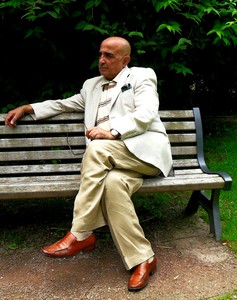 After high school, passionate about drawing since he was young, he won several design awards at the end of the year.
He entered the National Fine Arts Society of Algiers in 1971, where he studied drawing and painting.
A solid formation allowed him to discover the field of architecture and urbanism. 1976-1983, he worked as a designer and designer designer in architecture.
First at the ENERIC CADAT, then at the B EREP (Office of study and restoration attached to UNESCO for the renovation of monuments and historic sites, where he realized several projects: logo layout of the territory exhibition stand fair and models of the zoo.
1984: he opened his own office of study and workshop on Algiers in historical sites and monuments named "Art and Deco" of this period were born wall mural frescoes, model of old Algiers, old Constantine.
Several models of different types of traditional Algerian habitats for the third congress of architects exhibited at the cultural center of Tlemcen, then at the Pompidou Center in Paris.
Notably the design and production of the monumental statue measuring 7m50 Admiral Rais Hamidou in 1987 erected in the public park of Bâb el Oued in Algiers.
In 1983, the Algerian government appealed to all national visual artists for the foundation of a museum dedicated to the history of the country.
Redha Chikh Bled contributes by 3 Great Works that will reveal to the general public the artist and his talent, in Europe and Latin America where he realized the great wall mural Peace and Friendship at the University of Fine Arts in Guadalajara in 1986 (Mexico)
Focusing on perfecting his career as a technical artist, he moved to Paris in 1991 where he received a training with mention AD HOC on multimedia, and in 3D computer graphics max photoshop archicad autocad at the training center Paris .
At the end of three years of teaching as a multimedia project manager, it is with a new perspective that a new "Art Info" design office has been designed in the French capital, thus integrating new technologies into computer graphics.

Our artist taught and worked actively while participating in several exhibitions and Exhibitions in France, Europe and Mexico, where he met great painters of world renown like Gabriel Flores, Suidmak, Bouzid.
Thus, from these eminent meetings Redha Chikh Bled, detaching himself from his classical figurative painting, he turned to surrealism which will highlight him expressing freely his pictorial poetry
The first creator of surrealism in Algeria this new trend is asserting itself and occupies a preponderant place in the art market.
In 1992, he made a successful prospection in the Parisian galleries including the renowned gallerist Agnès Lecuyer
Thus will be born a long collaboration between the artist and the gallerist in Paris.
From 1993, the latter will organize exhibitions, individual and collective, in Paris.

From his travels and stays in Latin America and the deserts of the Maghreb discovering his peaceful people with whom he will live in a friendly atmosphere
Peace loving, Redha Chikh Bled currently organizes exhibitions and conferences on the plastic arts including ancient peoples such as the Aztecs, Incas, and Tuareg, nicknamed the blue men of the desert, whom he admires for their fashion of simple life, and their legendary hospitality in this land of light.

On the morning of November 10, 2001 at 8:30 precisely, the thunder rumbled and the sky suddenly darkened launching lightning with a heavy rain that fell on Algiers causing great damage in human life and material. I was present, c was terrible.

“The Call for Peace”

On the morning of November 10, 2001 at 8:30 precisely, the thunder rumbled and the sky suddenly darkened launching lightning with a heavy rain that fell on Algiers causing great damage in human life and material. I was present, c was terrible.

“The man of silence”

Tuaregs are generally referred to by the nickname, '' Blue Men ''. But are also nicknamed the Knights of the desert or the Men of Silence. I chose this title because behind this one exists a deep philosophy, that of courage, of generosity, of constancy in the trials in this immense silence of the desert.

“The Lords of the Desert”

The Tuaregs, contrary to what we think, are neither nomads nor sedentary. They are noble tribes warriors of the desert like the famous tribes of Kel Rela and the Kel Adenag. Descendant of the beautiful and legendary Tine Hinane. Formerly their men engaged in warfare or hunting nowadays only remain to them this last occupation which they consider as a noble activity.

The generosity of the Tuaregs is proverbial. These veiled blue men are Berbers of the Algerian desert. They are known for their courage, sobriety and especially their unparalleled hospitality.