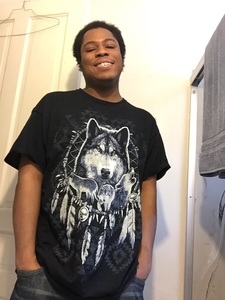 “Mercy and Grace in The Storm”

Even now after regaining my faith I'm in a storm but God shows me grace and mercy. The rain symbolizes the purifying power of God's grace and mercy on my soul and the darkness at the bottom is the sin that was washed away. The storm I'm in is meant to strengthen me and prepare me to be the man I'm supposed to be. Just because I regained my faith doesn't mean I'm automatically free of everything that I'm suffering. I need to keep believing no matter what because God is not on my schedule meaning God doesn't accept rain checks and he will deliver me when its time. He is testing my faith.

“Identity Lost In A Forest Of Complacency”

While I was away from God I slowly lost myself. I would give up so easily on my goals and dreams because I never wanted to do the work to get there. I stood for nothing and I accepted it. Even when I tried to I never persevered. At times I was suicidal but that was something I never believed I could do no matter what because it was the only conviction I had left. Being diagnosed with schizoaffective was very demoralizing because my freedom became severely limited. It was a setback because I had to deal with my diagnosis and life at the same time. Its not easy living with it but it's God's mercy that kept me safe even though I had given up hope. Even though I didn't believe in God He knew I would return one day to live in Him and not die in vain. My storm isn't over yet but I am seeking wisdom and guidance to be the man God wants me to be.

With my new found faith I have been struggling with the delusion God has given me. Even in my effort to let everyone know that God is real and He can destroy the walls of despair surrounding you even if you don't believe like He did for me. You might not know it but God is always trying to help you and loves you despite your shortcomings even if you choose not to believe in yourself he believes in you. Don't take your life for granted because its a privledge. I took my family for granted and for years I felt alone because nobody knew what I was going through. I was selfish and treated my mother like no good son should. My family loved me but I felt nothing so I stayed away and suffered in silence with no disregard for the way they felt about me. Even now I still struggle to do what is right. Am I doing this for God the right way? Am I being selfless? Can I make it through to the end? These are questions I struggle to find answers for while lamenting over what I feel like I need to do based on what God has told me. I have doubt and feelings of inferiority but I really don't know what I'm being chosen to do. God guides me but I still feel worthless. God told me to tell my story and right now I'm confused. But He hears me even in my confusion.

“lonely soul on a bed of regret being devoured”

Its a depiction of my struggle with lust and loneliness while I was away from God. It nearly ruined my life and I need to say that meaningful relationships are more important than sex because the lust of the flesh is detrimental to your spiritual and social maturity. I never had a relationship with a woman but when I sought one out it was for selfish reasons. I spent alot of time alone and disregarded the love my family had for me so much that I lived in a delusional reality given by God for the last 7 years. I had no idea it was a delusion because I was diagnosed with schizo effective disorder and I believed that I was mentally ill. I succumbed to the illness several times and even tried to make it believable to myself but this year God told me it was from him for my benefit and to restore my faith. He spoke to me in my house and I felt his presence and I could not deny his existence anymore. I had stopped believing in God when I was 17 and 10 years later I believe in God again after what seemed like a never ending nightmare. I'm still struggling but God has promised to release me from it when the time comes and I need to let as many people know that God loves them regardless and He is real.

I've been in a battle of depression and loneliness for the past 14 years. I turned my back on God when I was 17 because I needed answers I couldn't find. I said I would never go back and I thought it was impossible to believe again. Then at 21 I was diagnosed with schizo-affective disorder. My reality was confusing and frustrating. I thought I wasn't sick but that people were doing bad things to me for a reason I had no knowledge about. I struggled to keep my sanity because I was believing things that could not be possible. No one believed me so I just went along and the last 3 years I've been content with what I was given. Then one day at the peak of my confusion and delusional reality God spoke to me and said you are not being attacked without reason. He told me it was from Him and I immediately refused to accept the delusion. I felt His power all around me and He told me I was not hearing and seeing real people but delusions sent to me to restore my faith. I was inspired to call it the Call of faith restored. Last month I put my mother through stress and heartache for selfish reasons and at the peak of the drama I gave up my delusional thinking to give my mother relief not fully but until God confirmed it was a delusion and restored my faith. I had no idea it was from God but its not over yet and this is just the beginning of my salvation that God promised me. I'm in awe and disbelief that God would want me back because I turned my back and swore to never believe again but He cared anyway and I am still trying to do what He meant for me to do.