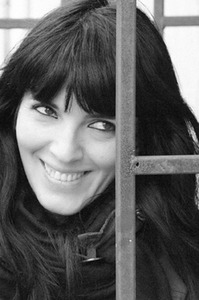 Beti Bricelj was born in 1974 in Postojna (Slovenia). In 2000 she graduated from Fine Arts on Arthouse – College of Visual Arts in Ljubljana. In her diploma thesis she focused on the elements of Aboriginal Art in the abstraction of three holy colors. After completing her studies she continued her education in Australia where she lived for a year. She accepted the invitation of an Australian government organization to participate in a research of the Aboriginal culture organized by the Department for Aboriginal Affairs, South Australia, Adelaide from 1998 to 1999.

Since 2002 Bricelj has been a member of the Union of Slovene Fine Arts Associations. She lives and works in Postojna.

Beti Bricelj participated in numerous independent and joint exhibitions in Slovenia and abroad. As an artist she took up an architectural challenge and designed the front of the Epicenter B2 Trade and Business Center in Postojna using her expertise in art.

Beti Bricelj is distinguished by her uncluttered concept and superlative painting skills, which derive from her committed and intensive work in the field of artistic possibility.

She has convincingly formulated her own style based on an original merging of technical perfection and a sense of exploring the laws of colour and their dynamic values, which stems from both a masterful precision and a feeling for spatial organisation and composition. This has enabled her to develop, with extraordinary diversity, approaches and possibilities that take the painting from its basic rational, mathematical geometric organisation to surprising, attractive and fascinating fractally organised compositions, which owing to merely apparent harmonisation have a very enlivening effect, since they extend out in ever new planes and their emerging patterns.

Until now the painter has already discovered and tested out the way in which basic straight lines and planes can create varyingly revolving movement, which spreads according to its own algorithm from a specific central point out of the painted canvas into infinite patterns.

The effective properties of colour and the mysteriously well-arranged shapes lend the painting field a special attractiveness, which also directs the gaze inside, to the selected or imagined beginning, the source or illusionist interior or what is called the primary depth of the planar picture surface, where we may observe the basis of the pattern and the convergence of colour-vibrating planes.

The painter’s carefully selected fundamental artistic elements, the considered composition and carefully judged colour combinations for each painting keep indicating in a special way her artistic variation, which in the cycles can be seen as a wealth in an endless diversity of possible invention. The construction of continually new and fresh visual possibilities, which differ in their “key” and rhythm of composition, enable her to develop and shape her own path through exploration of modular principles of altering the selected basis.

We can sense the genuine vitality of the compositions, which is reflected in the dynamic sense of order, a primary principle of fine art and a major distinction of internal insight into the relationships of fine art.

Beti Bricelj’s paintings now make up a sizeable opus, and we may address it in terms of various emphases aimed at exploring the inspiring and infinite possibilities of altering the well-ordered artistic basis. In this light we may sense how the carefully considered gradation of colour and the contrast create various feelings of undulation, rising and falling, spatial illusions as well as spiral twisting, or various movements on the surface and in the depths. She achieves all of this by merging thoughts and feelings regarding the operation of various rhythmic properties, which she transfers with exceptional imagination and persistence to the primary web of the plane, something we may perceive only if we take into account what kind of insight into the artistic structure the painter has created through her dedicated work and through numerous preparatory sketches and drawings prior to the emergence of the individual work of art.