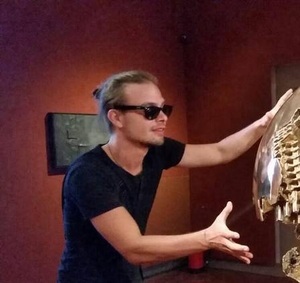 Brief presentation of the artist Armando Zelinotti, born in Marino on 29 June 1992.

The author, right away, has a strong passion for art in general, but the first real professional approach is by attending the Institute of Art "Paolo Mercuri" of Marino, where, during the third school year, is the winner of the competition organized by the Banca Credito Cooperativo di Marino for the creation of a commemorative medal.
After obtaining a high school diploma, he decides to refine his technical skills at the Scuola dell'Arte della Medaglia, established within the Istituto Poligrafico Zecca of the State of Rome, since the authoritativeness and prestige of the structure allow him to collaborate as a student. with the best engravers of Poligrafico.
Specifically, the author learns the art of engraving, wax modeling, forming, low relief modeling and sculpture in general, with particular regard to coin and medal modeling.
The clear improvement of their skills is also recognized by third parties and foreign, as demonstrated by the fact that at the end of the three years of high education at the Mint, the author reaches the third place in the ranking of the international coin competition, edition 2015-2016, promoted by the Mint of the Japanese State (Japan Mint).
In the same year, the artist obtains another foreign recognition, ranking second in the ranking of the competition, organized by the Mint of the Portuguese State "INCM", creating a coin dedicated to the poet Vergilio Ferreira.
He is also the winner of the XXXIV edition of the "Fiorino d'oro" in Florence in the sculpture section with subsequent exhibition at the Salone dei 500 in Palazzo Vecchio in Florence. In April 2017 he exhibited at SIMULTANEA ART in Florence.
Personal exhibition in July 2017 at Sala Lepanto Comune di Marino (RM).
As well as appreciating the participation in foreign competitions, the author constantly defends and cultivates the relationship with his local community, collaborating with local artists, among whom the sculptor and painter Stefano Piali deserves to be remembered.