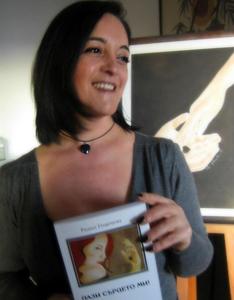 I decided that it was time to write something about myself, an autobiography of sorts. But what to write, especially when there isn't a very extensive list of artistic accomplisments in the curriculum?
I tried reading the biographies of both newcomers and established artists and then I asked myself what I would expect the biography of an artist to include?
The first thing that came to mind was name and age. Since you already know my name, I can skip this and age is a completely irrelevant factor.
Then I wanted to know if they were professionals, painting for a living or if they had regular jobs and art was a passion that they practiced in their spare time. If they worked I wanted to know what job they did. Finally, I wanted to know what accomplishments they had achieved artistically.
So now I believe I am ready to compile my own biography.
I was born in Naples, specifically in San Giuseppe Vesuviano on the 8 February some time during
the last century. :)
I've had a passion for art since my early childhood. I had proficient manual skills and enjoyed designing jewellery so would have liked to attend a school that offered a possibility to continue with this passion, but life had a different fate in store for me. I graduated from a technical institute majoring in accountancy - not exactly what I wanted.
In 1999 I moved to Udine, a province of Friuli Venezia Giulia, a region in the north east corner of Italy. This was a major change and I suffered greatly – I also believe that this gave rise to my artistic carreer.
For fun, and without much conviction, I started taking drawing classes and gradually moved onto oil painting. The more techniques I assimilated, the more I realised that it had become a neccessary part of me and I knew that this, more than anything, was what I wanted to do. I felt that painting was 'una via per l’animo'. The way of the soul.
The real revelation was when I first used pastels. It was a case of love at first sight and a most significant encounter for my soul.

“Painting is the most beautiful of all arts. In it, all sensations are condensed; contemplating it, everyone can create a story at the will of his imagination and, with a single glance, have his soul invaded by the most profound recollections; no effort of memory, everything is summed up in one instant. A complete art which sums up all the others and completes them.” (Paul Gauguin)

Female sexuality,as seen by a woman
This characterises the works of Ida Ambrosio.
Self-taught. Instinctive,and decidedly Mediterranean in describing her vision of what we know as
'The Other Half of the World'.
Strong, fervid, well-considered and essential constructions, detailed and never vulgar.
Instants of sensations that only a female soul can express about the female universe
(the repetition is intentional, to emphasize the emotive and communicative importance of the message).
A great deal of attention to the significant details of the figures is revealed.
The result is a natural composition of seemingly childlike clarity which transmits a feeling of warmth,
familiarity, every day life.
I believe anyone observing these works will recognize a wife, a daughter, a lover.
Nothing malicious .... just a tribute to a beauty which is often hidden "