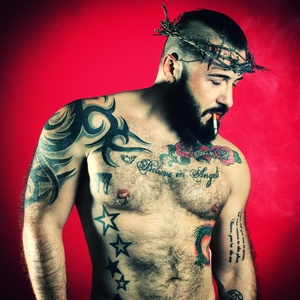 Artist Peter Zvonar has been following his unique vision. His staged photographs are defying stereotypes by explor-mg the nether worlds of the dreamscape.To explore this internal territory the artist provokes the senses of the viewer through the processes of visual displacement, juxtaposition, and reference shifts. As a result, Zvonar has created his own world reminding that our present day civilization and its rules of conduct and behavior is but a thin and fragile veneer, laid upon the psyche which contains passions and instincts of primordial nature. Not surprisingly, then, we find that the artist, in his works, explores the ambiguous liminal zone between the real and the imaginary, what is sensate and what is not, in effect bringing out for all to see how closely the sex drive interrelate through the use of Freud's pnncrple of the uncanny.

Zvonar’s images are residues of self-exploration -- images salvaged from the unconscious after a series of inner journeys. They also are social and cultural commentaries in which we are confronted with a world on the point of dissolution, fracture and conflagration. Through his intimately intense scenes the artist gives expressive form to the near-inchoate needs, impulses and instincts. Zvonar’s photographs are within the important artistic tradition of using the psyche in order to uncover what was for-mally submerged within repression. There are several distinct techniques that we are to note if we want to forge a path towards consciousness. They include a disorientation of sensation, in which the confusion of the senses allows theartist to begin apprehending his ability in becoming a Rimbaudian-like observer, and, the prospecting of black humor which allows the ego to overcome the problems of the external world.All three of these devices are found in equal measure in the Peter Zvonar’s charged photographs. The artist’s visual exploration is wide-ranging and his visual navigation within the self offer a penetrating look at the primacy of passion and the irrational. His provocative images, with their near-mythic thrust, invoke a Dionysian spirit submerged in the world of Eros. lt veers away against sanctioned thinking, against the canons of established religion, rules of the state, and sanctioned views of sexuality.

Peter Zvonar is in perpetul pursuit of creative individuation. He approaches this goal in a proccess of focusing his at- tention on the most important and immediate needs. Towards that end he has discovered (or invented) narratives and mythology to fuel the intentions of his work. Zvonar’s characters inhabit spaces and places that are in the world of the not-known in the realms that are subversive. The artist’s characters reflect the chemistry of imagination, the volatile and ephemeral reverie. If we were to permit ourselves the challenge of characterizing the complex and often contradictory quality of Zvonar’s art we might say that its incongruous facets arise out of a struggle to make manifest an ‘inner realism’ only available to the artist. It arises out of a world that only the artist is capable of identifying and tracing. He is engaged in seeking in art a satisfaction for man’s rage for order; he finds spiritual order, not divine revelation, in a secular imagination. In outlining that world’s contours to the observer Zvonar‘s logic of passion gives moral authority and remarkable subver- sive importance to the artist’s task of unveiling the marvelous.

John Austin is an art writer living and working in Manhattan

“The art has to be controversial. All great works of art which were supertemporal were always outside of majority’s understanding. The art should be stirring. It’s a kind of rebellion that comes from the heart and soul of the artist. When I create art I don’t think about the consequences of it, but the specific message of the piece, how I captured the story and it doesn’t matter if it’s a romantic story, story of one person, terrifying story or whether it shows ones hidden desires and urges. I like to portray these in particular. Maybe that’s why there is a lot of sexuality in my artwork as well as Christian symbolism. That’s why I am not as popular in my homeland Slovakia which has a very traditional Christian society. I also believe it’s because of my attitude to life and my openness.”