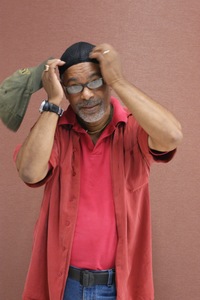 My name is Walt Hardy. BA in Fine Arts and Graphic Design, Norfolk State University, Norfolk, VA USA.
Artist Statement:
As a child growing up in a small southern city, I had a front row seat to the contradictions between good ideals and poor execution and between what was taught and what was practiced. In my community, inquiry could be seen as a good thing and inquiry could be perceived as crossing a line. In my surroundings, this concept of inquiry was called “signifying” or tending to other peoples business. I learned at an early age that “signifying” was both praised and damned, often within the same context. My life and art has been defined by the constant contradictions of inquiry.
My work is a contemporary examination of prevailing attitudes, conceptions, and occurrences and the rules that forms our perceptions of art. My creations seek to identify and release the tension between the way something originally looks and the way it reveals itself to me, as well as, the tension between it’s obvious meaning and the implications my signifying, interpretations, and reconstruction has revealed. I take some inspiration from the Spanish artist Juan Gris, the Cubist, who was not confined by the rigid geometry of perspective. In a similar context, I introduce the idea of relativity into my works because I fuse selected elements from one or more subjects into one concentrated image.

In my process, I strive to see beyond the distractions of the obvious in my subjects, to reveal though inquiry, close engagement, and observation their willingness to be transformed, and the meanings lying just beneath their surfaces, oftentimes, unseen by the casual observer.

My goal is to inspire all who see my work to look more carefully at the world around them, to question the obvious, to peel away at the prevailing notions in art and in life, and to see the beauty in the dichotomy of rearranging the pieces.

Strive On, and Have Faith


Inspiration Statement: To commemorate the World War I Centennial.

“We have not sought this reckoning, we have done our utmost to avoid it; but now that it has been forced upon us it is imperative that it should be a thorough reckoning,” H.G. Wells

The idea for this project came when I observed this painting and felt the presence of a camouflaged WWI German MG 08 machinegun. Intuitively, I feel this painting whispering of the destructive nature of man’s inhumanity to man. In a contemporary context, I have reinterpreted and illustrated this concept in a more personalized way.

Background: Bowl of Apples on a Table

- Painted in 1916 during World War 1 which lasted from 28 July 1914 to 11 November 1918.
- Reflects the disruption that the war brought to his artistic conscience.
- Lived in Paris during the German Occupation.
- Painted during so called “experimental” years of 1914-1916
- Matisse wrestled with the challenges of Cubism.

Background: Strive On, and Have Faith

- This project aimed to imagine, reinterpret, and produce 3 contemporary visual art works based on Henri Matisse’s 1916 oil painting Bowl of Apples on a Table in the style that he may have executed during his Neo- Impressionist (Divisionism), Postimpressionist, and Fauvist works.

This is the first work of art in this series. This work of art is an artistic statement on the recurring systemic violence against Black Americans. This work re-imagines and unveils key elements from the aforementioned work by Matisse and introduces the gold front sight that partially encircles the targets. This work is representative of the gunfire and violence directed in turn against groups such as women, minorities, and immigrants. Just when we think this violence is finished, it loops and starts all over again, thus, the blues turnaround.

This is the second in the series, in this work, I used large globes to represent an hourglass and the small spheres to represent the countries fighting or involved in WWI. The significance was that time is running out on support for an antiquated system of government using royalty and birthright as justification to rule a society. This work is representative of the violence against countries. The bomb going up and the bomb coming down is representative of the destruction yet to come.

This is the third and final work in the series. In this abstract work, I wanted to create a sense of uneasiness in the viewer: that somehow he/she is being watched. The gold front sight is still present and the plate is empty except for the single green apple in the composition. This makes it a confrontation against something that is different from the rest. This work is representative of the violence directed individuals and the need to strive on and have faith.