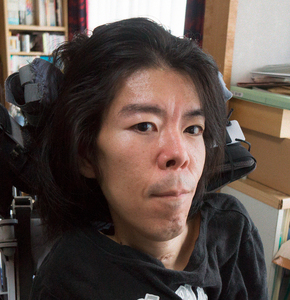 Despite having the limitation of physical mobility from a young age due to a congenial disease called myelopathic muscular atrophy, he started painting in his youth.

When he could still move his hands, he painted with watercolors and oils. As he gradually lost the ability to use his hands, he became more eager to seek deeper, further-reaching ways of expressions and began using computers when they became widely available, creating graphics by a stick held in his mouth.

He also produces music and three dimensional works by directing his collaborations. In 2002, he mounted a camera on to his custom made electric wheelchair, which he controls with the stick held in his mouth, and began publishing photographic works.

At first glance, his work may appear to lack a sense of unity. However, when taking a close look, all his creations have the intermingled elements and themes of “life”, “death”, “light”, “shadow”, “happiness”, “sadness”, “eros”, and “hope”. In other words, it is the “life/existence” and the “universe”, which represents The”U”zing himself.

A viewer of his work once said, “Your picture is a print from the blink of your eye. It is a world that only you can see.”

He may not have “freedom” in a physical sense, but his personality and creations are “free”, which makes him “jiyuujin” aka The”U”zing.

He states: “I am what you call physically handicapped. So what? Probably nothing. It is simply the truth. What I want to create in the future is something I, myself do not know and something I look forward to. For me, creating is comparable to breathing, and they are much the same. It is not a job or a hobby, nor is it something that can be categorized as a like or dislike. Nobody breathes reluctantly because they feel obligated, and no one breathes because they find it extremely fun and enjoyable. It is not something you feel you want to quit, and is it something impossible to quit on your own will. For me, creating and being an artist is precisely the same as that. Of course, if it’s painful and something you hate, you would not continue such a thing, therefore, one can assume that you “like” it. However, it is not something that appears in your conscience and is slightly feels different from a like or dislike. For me, being an artist is life itself.”