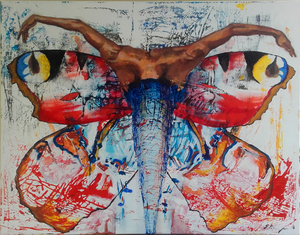 It was Albania’s longstanding tradition of Social Realism that kindled my interest in the techniques of the classic modernists. I first studied at Cluj Napoca Art Academy, Romania (ex-communist country like Albania but quicker in welcoming Western influences) before eventually ending up in Scotland – first at the Leith School of Art, then at the Edinburgh College of Art.

Traveling from east to west, from Albania to the UK, I became interested in the relationships that we create with our past and present experiences. As we adopt a different life I often ask myself: what changes and what remains the same? We seek out change and yet we cannot escape what we once were… We regret what we might have lost and are afraid what we might become. My work often conveys the metamorphosis that time and environment imposes on how we see what surrounds us. Transfiguration and the multiple layers of change are the elements I like to play with.

One of the three finalist and second place winner of the art competition The Art Box Project in Miami.

A collection of paintings under the theme “Through the looking glass”

A collection of paintings under the theme “Metamorphosis”

A collection of paintings exhibited under the theme ‘Down Memory Lane

We create but the creation carries destruction in itself. Towards the inevitable destruction we create, the intensification of the circle of creation destroys boundaries and the destruction itself opens new spaces, gives freedom of creation, overcome the previous limits and always in search of new discoveries.

“The Birth of Agony”