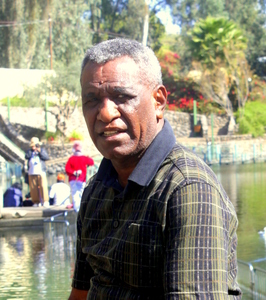 . My name is Jason Sentuf. I am a Pastor of a Church in Indonesia but Painting is my hobby as well. Thank God that he has given me such a talent since I was Child.. I am more inclined to paint the Landscape, animals and human body since I was in primary school. I have been influenced by some Europe Expressionisms and Impressionisms style. I like Claude Monet and Vincent Van Gogh's style...and through both greatest painters, whether by visits to the museum or read their history books, has increased my knowledge of how to paint professionally and adds techniques and the ability to find all beauties around me - and to express these beauties on canvas or paper.

After graduated from Bible High School In 1975 I was appointed to be a civil servant in 1977, and served as Bible teacher at one of public elementary school in Jayapura, the capital of west Papua Province for 23 years . Every years I have the opportunity to make both Christmas and Idulfitry greeting cards ordered by my students.. The principal of the school saw that if there re some artistic talent of painting in me, so he asked me and appointed me to be an art teacher apart from being primary task as a Bible teacher . In 1989 - 1992 I was asked to be an Art teacher of several High schools in Jayapura. But all of my art�s teaching merely in theory; mostly because of how difficult to find various kind of painting equipment such as canvas, oil paint, brushes, and medium there, These Materials only found in Jakarta, Yogyakarta, Surabaya and Bali.. I�ve got retired so early in 1999 on the basis of personal request due to the Church Organization expansion to South Kalimantan (Borneo). Here, in this new region I could find myself as I am. Being a pastor, focus to Church service is a must, but it doesn�t limit my hobby of painting. I usually have my spare time and spent a few days to paint when I am in mood. It is not difficult to find painting equipment anymore. Some of my works are the 'thought' process right down to the last stroke. But sometime go outdoor for painting. I used both brush and palette.. Winsor & Newton (winton) is my favorite oil color so far... but every now and then I work in acrylics or watercolors. I can spend hours to a couple of weeks on a painting, especially in oil. I paint what I like and if there is something caught my attention whether it real or imagined scenes of life, something from the book or something from the photo - I'm going to paint. Each subject was determine me how 'it would be painted. I do not intentionally painted in 'style', it just manifests itself. There are another power at work! Each piece has been finished for me is a celebration and a great thanks to my Creator. My painting is the essence of me.
. I usually got painting equipment when I make a few days gospel mission trip to Yogyakarta ( Central Java).

A Pastor, writer, and Peinter from
West Papua...

This is my brother daughter with my wife, an Asian woman. My wife took her with us when we were on our way to Ayamaru lake for one week Ministry. This show that there is no racial differences any more between Melanesian and Indonesia. Only through the Love of Jesus Christ, He make us one. This painting is perfect for a girl's room, healthcare office, children lobby or wherever a spot of youth and sunshine is called for.

Descriptionout of great waves, from pacific oceans,
there is a sound, a song of praise in sweet voice,
to the noble land, unto the great land,
with its white shore, and its mountain that rises up
to the highest clouds in the sunny sky.
such is the land in which I delight "West Papua"

composed by:
Pastor I.S Kijne.
The song -translated from Malay to English

Walking down the only protocol street in Sorong City, you will pass through a container harbor, a large commercial port in Sorong, West Papua. To the right side is the Mamberamo Hotel. After the harbor and Hotel, just on the left side of the road bordering the beach, with wide views of the distant sea and islands, stands about one to two meters thick wall along the coastline. Not less than three kilometers, the wall was built as a fence, embankment or even as breakwater in the west wind season. Uniquely, every day along the wall is always crowded by city residents, to just unwind and enjoy the afternoon ocean view.

The "Berlin wall" in Sorong City seems to be a landmark as public need space, to gather and socialize the citizen. It is also a favorite location. You can spend the afternoon at Tebok Berlin - enjoying the sunset.

Such a long beachspace will be crowded by citizen when the sea is calm ... old, young people, children spend an hour swimming and sunning under the morning sun before start the whole day of their activities. But instead, do not try to go near and use this beach in any activities during the waves season.

The Sorong citizen calls it the Berlin Wall. remind us of the wall bordered both Germany, the West and the East before united and finally torn down.

"Berlin" is short word for "Berlindung". We usually call it " Tembok Berlin" (in Indonesia) which means "Protection Wall".

The atmosphere of Berlin Wall along the night was no less interesting. More than 50's seafood tents row neatly set up along side of the wall change the face of the Berlin Wall into a typical culinary tour. Fresh fish, shrimp, squid and crabs are the main menu in each tent. ... really intrigue us.

Indonesia, with its vast islands, tropical weather and rainforests is one of the world's richest and most important country in term of biodiversity. In addition to the many resident birds, of which the most important are the 380 endemics, a considerable number of migratory species winter in the country to escape their northern breeding grounds. In this gallery I only display some of my works entitled Bird species in Indonesia which is found in eastern Indonesia, including my homeland, Papua. Birds is one of my favorite subject of painting. More will be uploaded soon...I hope you will enjoyed them......

“Time for Birds singing and Dancing”

Now is the time for birds to sing and dance freely on tree branches and in shrubs - on the mountains and in the valleys; on the lakes, islands, all along the river banks and on the coastal beaches - while humans are trapped in their homes. Several years ago humans accused them of being carriers of bird flu apidemic . Now they freely enjoying their world. ,, No more humans carrying their air rifles chasing and shooting them at their own nature home and their environment. Humans are being cooped up in the house and do not move anymore outside their home. Humans outdoor acktivities lockdown globaly - quiet everywhere. The Birds simultaneously singing and dancing. Their new song entitle... Welcome Covid-19.