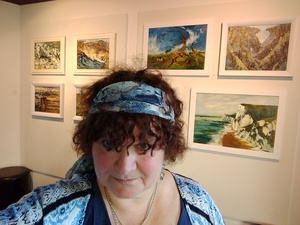 Annemarie was born in Vienna/Austria on 8th December 1959
She came to London in January 1980
During the early 1980s, life unfolded for Annemarie in the UK, which led to becoming a British Citizen.

Since her childhood Annemarie has developed her drawing abilities, but she has begun to use colour during her first months in London.
The friends she’d made and people she’d met encouraged her to go to Art College.
Annemarie studied 3 years Painting & Drawing, and Art-Foundation at Sir John Cass School of Art in London, Whitechapel.
However, during the years that followed, she mainly produced drawings, which she sold to collectors from all over the world in the heart of London along Green Park.
Only after she could leave an unhappy marriage, around 1990, Annemarie was able to focus on her creative roots again.

Her earlier studies led Annemarie to explore the exciting possibilities of colour, different media and methods.
She has always returned to painting in oil, but with a fresh and exciting attitude.
However, oils became her favourite medium.
For some years Annemarie often used strong, but dark colours in most of her work.
She has been creating paintings of a surreal nature, which often were a reflection of turbulent emotional moments, amongst her abstract and her figurative work.
After moving to the country (Hertfordshire), she met her second husband in 1996, George W Gill, a very talented artist. George encouraged her artistic talent, and they became critics of each other’s work, which led both their art work to stretch and evolve.
George often guided her how to See when looking.
Annemarie began to use lighter and more expressive colours.
Her paintings became mainly figurative, developing a more painterly style.
Annemarie has always loved wildlife and horses. When she had her own, and she worked with horses for about ten years, it provided her with the insight and inspiration for many equestrian paintings.
Her subject matters have included any marine aspects, landscapes, people, wildlife, and inanimate objects.
Music has been an important part of her life and of her paintings, influencing them in some parts.
Listening to music and playing the bass guitar or piano, often are the energy and inspiration behind many ideas.
Annemarie ultimately aims to capture the movement and the feeling of what she sees, expressing this by combining figurative elements and moving towards the abstract.

Annemarie attended a Workshop with Ken Paine at the London Mall Galleries in 2007, which has led her to explore portrait paintings.

There is the sea with its many different moods, always the same ever changing, soothing, destructive.
A force to be reckoned with.
There are amazing man mad structures co existing, in an effort to tame the wild force of the sea, to save the land from being eaten away.
These elements and the structures are the inspiration for all my sea paintings.

These are gigantic metal structures to stop the sea water from coming inland.
There was that feeling of enormity of them struck me, when I was walking through them.
The silences and yet noise by the water, the feeling was amazing - I had to paint that

“A TREE ON THE BEACH”

OILS-CANVAS BOARD 18X22 INCHES
This can be a wild part of the east anglian coast, Covehithe.
The long lost and dead trees. They were swept out into the sea, and returned again at some point.

Oils-canvas board, 18x14 inches
Waves - every changing, gently, or fierce and powerful - they are the most fascinating subject matter to me

Everything is Abstract.
Images start off as Abstracts - until all pieces are put together, close together,
Unless, one stops before that.
My concept is - Keeping the Essence of the Specific or of an Idea

Oil-canvas board 61,2 x 45,5cm
When I watched and captured this Eclips, this experience made me want to paint it.
It was my Awakening to Myself at the same time