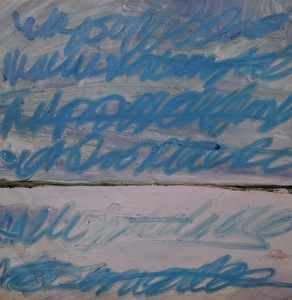 Taha Afshar’s (1983 – ) work captures the delicate tension between the objective and the subjective, the particular and the universal, the momentary and the timeless. For Afshar, the process of painting seemingly operates as a form of meditation, where meaning is generated through the durational practice of working itself. Finished images thus reflect the thickness of human experience and sense perception, building layers of meaning into a single unique scene.

Born in Winchester, England, he studied Art and History of Art at Winchester College. From a young age he exhibited in local galleries, where he also gained awards. He graduated from University College London with a degree in Economics, followed by a PhD. from the London School of Economics.

Recent landscape paintings have drawn inspiration from Nordic landscapes, where he visits to paint. In a 2015 interview, Afshar makes reference to the acutely self-reflective nature of his work, citing a certain proximity to surrealist techniques of automatic writing. Layers of lived experience are literally woven into one another here: the harmony of landscapes scenes occasionally interrupted by handwritten text.

This almost alchemical translation of human subjectivity onto the canvas carries with it an unavoidable sense of existential contemplation, calling forth the spirit of work by Giacometti just as clearly as it references Turner’s elemental aesthetic or Monet’s temporally sequential series of works. In fact, it seems the decision to paint at intervals throughout the day corresponds as much here to the documentation of lived experience as it does the fluctuation of light over a landscape. He writes: “The process is key. The heightened sense of openness to all stimuli, both internal and external, facilitates an ultimately positive spiritually transformation. That is why I paint and sculpt.”

The following paintings were completed in October 2015. They are all landscape square paintings carried out en plain air from the same position, from an isolated cottage on a lake near the town of Alignsas, Sweden.

The early autumnal landscape would change minute by minute, as the gentle wind would adjust the clouds. As a result, each painting is an attempt to capture a different time of the day. Hence, the titles are all times of the day in reference to this point.

The paintings are all completed with oil, and oil pastel on canvas. Some of the work is on partially primed and lightly encrusted canvas, whilst others are on the raw back of primed canvas. The works were executed on horizontal surfaces, allowing the colors to flow freely across the creased landscape of the canvas itself. All the works were largely completed on site over the course of a week, whilst some of the pieces were reworked in the artists’ studio in Hampshire, England. Despite the short intensity of the work, many of the works are composed of several veils of oil paint, whilst others are completed with words that were automatically received and expressed, adding a literally dimension to the works.

“5 pm” was the first work completed on the trip, wherein it is written “the landscape changes every second”. These words are reflected, in reverse, on the sky, as a result of the canvas being pressed against itself. This print is then crowned with the words “come on, let’s love”, drawing on the central theme, the word “love”, that is repeated in several works.

“Love” is faintly written on the base of the works “6.30pm” and “7pm” a pair of larger pieces, which are embellished with watery yet warm tones of a light pink, merging with rusted yellows and a blues hinting at the sky and water. The horizon mediates around the center of the work, as the piece attempts to reflect not only the detailed magic, but also, the overarching simplicity of the natural setting.

Some of the works are meditations, whilst others are an attempt to capture, in painting, the fleeting moment, before the clouds and suggested landscape’s composition would reformulate. The result is a collection of paintings that above all, tell the classic tale of a painter’s very human and imperfect withdrawing journey towards nature in order to express and bring home to share its balance and harmony. In an attempt to achieve perfections, with finite time and resources, the worn canvases are the artifacts, that serve an allegory to our own short-lived journey on earth. With calm, repose, richness and subtlety, as well as lyrical charm with a touch of love, the paintings are but sketches of the instants that define everyday on earth.