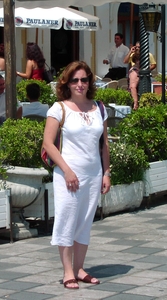 Doranne Alden Caruana is a professional artist and graphic designer.

As an artist, her preferred painting medium is ecoline liquid watercolour. Doranne was born in Sliema in 1963, and after completing her education, studied art for a number of years at the School of Art in Malta under the guidance of Joseph L. Mallia (1937 - ). She also followed other Design related courses, including Interior Design, but chose to work as a Graphic Designer and Artist.

At the time she frequented a painting group led by Joy Micallef Farndell (1924 - ), an exceptional watercolourist. In Malta Doranne worked as a graphic designer for over fifteen years with several major advertising agencies and eventually as a freelance designer. Over the years she gained experience in several aspects of design, but it was during the years as a freelance designer that Doranne produced her first series of original postcards: ‘Details of Malta’, posters: ‘Glimpses of Malta’ and personalised photographic calendars. Inevitably this led her to launch her own advertising agency: ‘Details Design Ltd’, along with a partner up to 1995.

In 1996 she settled in Bavaria, Germany with her family until 2003. While living there she held drawing and watercolour classes for adults. She also became an active member of a group of abstract artists organised by German artist Frau Renate Botzenhardt and participated in joint and collective exhibitions with them. Doranne Alden has had four major exhibitions abroad which were; three solos in Germany and one in Austria: the first at the Gasthaus Zur Post in Wessoburn, Germany, while the second solo was held at the Art Hotel in Vienna, Austria and the third at Volksbank in the area of Passau, Germany also a joint exhibition held at the Town Hall in Tutzing, Bavaria.

In 2006 Doranne won first prize in the watercolour section in the Silver Palette Competition organised biannually by the Malta Society of Arts, Manufactures and Commerce. Her third solo was held in December 2008, at a VR-Bank near Passau and most 4th most recent solo was in 2009 at the premises of German Maltese Circle in Valletta, Malta. Bavaria

Over the years both foreign and local media have greeted Doranne Alden’s work with positive acclaim –* infact her work has been referred to as ‘little jewels of art’ in the ‘Ammersee Kurier’; also ‘natural without being too realistic’ a phrase by Thomas Wellens in the ‘Weilheim Tablett’; “the mixture of colour and form are the very strength of Doranne Alden” - Starnberger Merkur; Marika Azzopardi coined the epithet ‘warmth and mouth-watering mellowness’ for her fruit (pears) in the ‘Weekender’ the culture section of ‘The Times’ a local paper. Doranne Alden’s paintings form part of several private collections in Malta and overseas. One such work holds pride of place in the foyer of the Munich International School, Percha in Bavaria. Among her many prestigious patrons are Volksbank in Germany, Valletta Fund Management, Malta, the Strickland Foundation, Malta.

All work was produced over a 3 week period and worked alla prima - some of the more recent works were done with no reference to photos or pre-sketched images. I worked with a combination of water-based media to produce these pictures

Worked in Ecoline Liquid Watercolour - a3 on 300grms watercolour paper

“Night Time in the village”

A5 board - ecolines, Indian ink, and varnish

Ecolines and Indian ink - a5 board