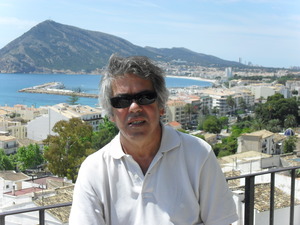 Born in 1953 in Torres Novas, Portugal
He studied at the School of Industrial and Commercial Torres Novas, now called "MARIA LAMAS" where he showed great ability for drawing and painting and also for crafts, and participated in the annual exhibitions held in the school with students' work.
He began his professional activity in the artist in an advertising agency as a designer / creative maquetista as well as technical designer for screen printing at eighteen. To enhance technical knowledge and studied drawing and oil painting and watercolor.
With greater or lesser attendance has always been dedicated to oil painting, acrylic and watercolor, having already done some works of sculpture and pastel. Passed by the Experimental Theatre TETN-Torres Novas, as an actor and set designer, had a participation in amateur theater (CINEGRAMA 8) as a draftsman and technical animation film. He also participated in photographic exhibitions held by Film Society of Torres Novas was in 1973.
Participates in the following exhibitions of Fine Arts
1972 - Collective Folk Art Center in Belem - Lisbon
1973 - Collective Exhibition of the Agricultural Credit Bank
1973 - Hall Youth Centre TORRES NOVAS
1975 - Collective at the Headquarters of the CIMSM in SANTA MARGARITA
2011 - Hospital de Torres Novas
2011 - Library of Alpiarça

In 1978 he began working in the area of ??construction projects as a designer, a profession that has followed until the present time.
It has some work around for several private collections and in 2011 back again to expose individually in Torres Novas in the entrance hall and Saint Elizabeth Hospital, the Municipal Library of Alpiarça Dr. Herminio Patience by height of the celebrations of 97 years in the city.
Come referenced in the Dictionary "20th CENTURY PORTUGUESE ARTIST" in 1978 as a painter and sculptor, and www.arteglobal.eu in conjunction with national artists and the rest of the world.