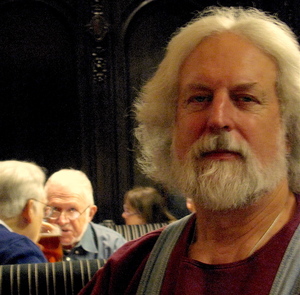 As a fledgling illustrator in Brooklyn during the 1980’s, I took on any project thrown my way. I refer to that time as my “snack or famine days”. Eventually, I zeroed in on editorial work and soon scored assignments at publications like The New York Times, Los Angeles Times and The Village Voice (primarily covers). Since the early 2000’s, I’ve concentrated on gallery work with an editorial, satirical slant..... essentially larger oil paintings with conceptual content reminiscent of my illustration years. Lampooning politicians, pundits or spiritual leaders who specialize in alternative facts, manufactured outrage, false equivalents, convoluted conspiracy theories and tunnel-visioned tribalism (whew) is my form of protest and provides a satisfying outlet (i.e., it minimizes shouting at the TV, reduces those pesky nightmares & eliminates my quest to prove Jeff Sessions is actually an interloper from The Shire).

My work is the product of my environment over the last three decades. Generally, I've had a positive experience yet tend to be irked by frequent political and religious hypocrisy, general apathy (relating to war, the environment, fact-challenged pundits, etc.) and dogma of any stripe that leads to social and spiritual tunnel vision. These themes are prevalent in many of my paintings although are often explored using satire and humor as opposed to a sledge hammer (granted, I do use that on occasion, too).

Ma Nature Revisited (30.5”h x 22”w framed) - This painting is an update of my 20 year old painting, Ma Nature: This Time It’s Personal. This revisited version examines Mother Nature's reaction to years of environmental neglect and in particular, the probable results of the current Wheeler-led EPA's oversight, or lack thereof. Remnants of Trump donors lie in the rubble.

Blinded by Delight Redux (30”h x 20”w) - This painting warns of the dangers of blind love. Whether it manifests itself via unprotected sex, obsession, infidelity, etc., there is often an unhappy ending.

Fox Muse (18”h x 24”w x 1.5"d) - Kellyanne Conway channels Samara, the dead girl from the movie “The Ring” starring Naomi Watts. When I see Kellyanne on Fox and occasionally on other cable news channels, I'm often reminded of Samara rising from the well and then coming through the television to wreak havoc.

Half-Cocked & Loaded (20”h x 10”w x 1.5"d) - Originally, this painting was conceived to explore Trump’s cozy relationship with the NRA & resulting gun-related deaths from 2017 thru 2019 (excluding suicides). However, it soon expanded to also highlight some of his numerous visual & speaking gaffes (it’s pronounced “origins” not “oranges”, you twit), his bogus bone spur-related draft deferment, his call to rake the forests to prevent wildfires & Trump’s failure to see & react to the dangers of Covid 19, including his irrational disdain for protective face masks. Fortunately, Trump recently had an epiphany regarding the latter….. “I had a mask on. I sort of liked the way I looked. OK. I thought it was OK. It was a dark black mask, and I thought it looked OK. It looked like the Lone Ranger.” Now that’s progress.