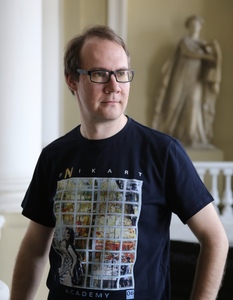 Selected Awards:
Diploma for the best work of the contest “We communicate, we live together, we live” on behalf of the Council of Europe. 1996
Winner of the “Olympic Sports and Art” competition held by the International Olympic Committee. 2007
Diploma “The best work of the Union of Artists” 2014
Medal of St. Innocent 2015
Appreciation Letter. State Museum of the Roerich family. 2018

Empty stadiums and complete indifference of millions of young people to their spiritual and physical health.
The desire for wealth, which is not earned by their labor, knowledge, talent - just for unrestrained enrichment.
The impact of modern technologies and the Internet on the people’s nefarious feelings and the suppression of mind, honor, nobility.