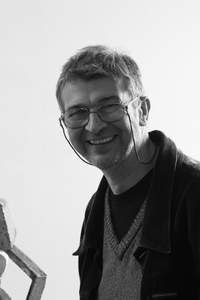 What is my philosophy of art?

You should always choose the path you are afraid of taking.
If you get bored with making something, don’t continue. Throw it away.
In art, duty is a deserted land.
When making an artwork, use your knowledge and leave your emotions behind.
Criticism is worth considering wherever it comes from. There is no good or bad criticism, only the critic can be good or bad.
The less you try to meet the others’ expectations the bigger influence you can have on your environment.

New themes and ideas usually come to my mind as I wake up, when I’m still half asleep. I quickly make sketches of them before they fade away. After a while, I select some of these drawings and begin making a plaster model of the scuplture. I use a great variety of materials, such as bronze, stainless steel, acrystal, wood, and paint, and I like combining and contrasting them. But I decide the actual material, technique and size of the work only after the plaster model is ready.

As a sculptor, I’m interested in many different kinds of themes. Some are ancient, such as sex(uality), death, god, the human figure, the head etc., that are depicted by my work in an unusual way. The characteristic parts of the human body – the hand, head, leg, eyes – are not present in their true-to-life anatomical structure, but are reduced to geometric forms and reorganized as geometric structures. I am also attracted to the extreme. If my theme is a god, it must be the goddess Shiva with her many arms or Golem with his brutal energy. I also find some modern themes quite challenging and exciting: outer and inner forms, i.e. that which can be seen from the outside and the inside of a form, how to use color - paint - on sculpture, the structure of the material and its effect on form, the outer as well as inner side of a surface on a sculpture, design, combining two kinds of materials on the same artwork. I enjoy experimenting.

Why do I create sculptures? Because it’s The Viewer who really matters to me. He/She is the most important. In fact, without The Viewer sculptures do not exist. That is to say, by looking at the actual sculpture each individual creates his/her artwork in his/her imagination bringing it into existence. As a matter of fact, everybody takes something a little different from the same sculpture and creates another artwork by using his/her own creativity, feelings, memories and experiences. My goal is to catch The Viewer’s attention and to inspire thought. I would like to invite The Viewer to see my sculpture and to take part in the creation of the artwork using his/her imagination.

I enjoy experimenting. I am interested in ancient themes e.g. sex(uality), death, gods etc. In my artwork the human body is reduced to geometric forms and reorganized as geometric structures. I am also attracted to the extreme. If my theme is a god, it must be e.g. Golem with his brutal energy. I find some modern themes exciting, too: outer and inner surface of the form, how to use color - paint - on sculpture, design, the structure of the material and its effect on form, combining two kinds of materials on the same artwork. During my career I have used a lot of materials: wood, bronze, aluminum, stainless steel, acrystal, in their natural and painted versions. You can see a selection of these works in this portfolio.

I create sculptures because it’s The Viewer who really matters to me. My goal is to catch his/her attention and to inspire thought. I would like to invite him/her to take part in the creation of the artwork using his/her imagination.