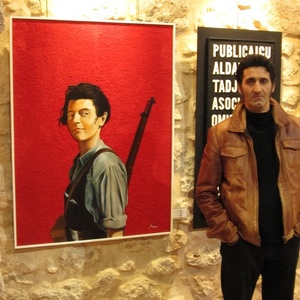 He was born in Quintanar de la Orden (Toledo) in La Mancha, land of giants and of the legendary knight-errant Don Quixote.

In 1981, he studied in the high school of Quintanar de la Orden while attending for the afternoon to drawing and painting classes in the Studio of Antonio Arnau. In 1983 he formed the punk-rock group, Klandestinos. He collaborates in several fanzines of this village like "La Lechuga Fresquita" or "La Tribuna".

In 1985, he moved to Madrid and studied Psychology at the Complutense University. In 1987, he studied Photocomposition at Vallehermoso College of Madrid. In 1989, he attended the School of Arts and Crafts (n. 10) of Madrid. In 1991, he studied Drawing and painting with natural pattern at the Fine Arts Circle of Madrid. Since 1991, he is fully dedicated to painting and illustrating collaborating with such important fanzines as "El Víbora" or "Totem".

The work of Meko highlights the nature of transformation, in the most direct sense that we assign to the art. It uses all kinds of materials and techniques, with total freedom and often spontaneously. His painting, and in general all his work, contains a high poetic ingredient. Their research is constant, for example, in recent years, we can observe the use of different materials and fabrics prepared and manipulated to produce folds and wrinkles, or different levels and spatial planes of other materials glued on successively, in many cases, using the "collage", which is incorporated by its strictly pictorial values, due to its dynamic sense of art and, likewise, their need for realism in some lyrical mode.

The timelessness and the image matter as the axis of the visual experience determines the artistic production of Meko. Timelessness, image and matter in a work whose path runs from the Conceptual Art and materic Art between the colorful and informalist commitment and the constant pursuit for reinvention.

Meko used techniques which mixed pigments traditional art with materials as sand, fabric, straw, rope, etc.., with predominance of collage and assemblage, and a textured close to bas-relief. Use the technical mystification and use of heterogeneous materials, often waste or recycling, mixed with traditional materials art looking for a new language of artistic expression. Apply its mixture of various materials in compositions that take the consistency of walls or walls, which added several distinctive elements. Images that reflect a concern for human problems: disease, death, loneliness, pain and sex. Tone akin to existentialism says the tragic destiny of man, but also claims a freedom, the importance of the individual, his capacity to act against life, ultimately free search of knowledge.

“In a Perfect World ”