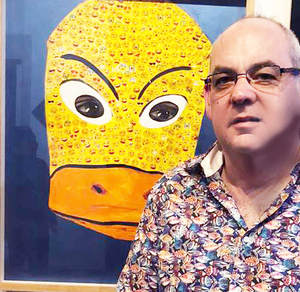 Within the fauna of archetypal bodies I developed my project of research-representation "The Forbidden Color". With this proposal I seek to unveil the constructions of codes and levels of consciousness, wounds, traces and fragments where a repertoire of languages is constructed.
These expressions question or endorse the Concept of prohibition, whether they are socio-political or socio-economical cultural elements. Childish symbols are important in the construction of my art pieces, since they are the reference, the elements of that moment in life, our childhood, where we build our beliefs and create our agreements with the world of codes with which we reaffirm our criteria.

Our perception of the world and our voice of judgment forbid the colors of diversity. For that reason, recognizing ourselves as a mirror, makes us know that what we believe about others is a reflection of our own beliefs.

Short attention spans and an intense need to experience constant change can be a fierce obstacle for the Third World Woman. Passionate and irresistible, she will live fast prohibiting the neediness of others.

The diversity of experience comes not from consciousness itself but from the other multiple emoticons aggregates in the painting: an apparently infinite array of physical and mental objects; the interpretation of these by means of the symbolic language of perception; their texturing with varying shades of pleasant and unpleasant feeling tones; and both the active intentions and passive dispositions respond each moment to the forbidden colors of our thoghts.

This decolonial boy is dressed as an ocelot because his soul has left behind the criterion that wild animals are dangerous and forbidden by our humanity. He decolonizes our mind by integrally loving nature and not cultural judgments.

VARIATION OF A BROKEN HEART

I am a Jewish/ Guatemalan artist and I have dedicated myself to thoroughly investigate my Jewish identity.
There is nothing bigger than a broken heart- Rabbi Kotzk.
This art series seeks to share the big opportunity that exists on understanding that a heart full of ego when it breaks into pieces, it opens a window for light to fill it in order to know that only the Light of the Creator can help us change it. It means not being depressed or wrathful when we see our selfishness. It means feeling broken on the one hand, yet happy and certain that the Light will help us take care of problems on our broken heart opportunities.
I am enclosing three artworks which represent the variation of a broken heart.

“VARIATION OF A BROKEN HEART 1”

Each heart is filled with ego and when broken like the volcanic stones that are under its metal image, which are the result of its eruption, they achieve a channel to receive the Divine blessings that shine from the heavenly windows over that heart.

“VARIATION OF A BROKEN HEART 2”

THE HUMAN BEING IS A MICROCOSM OF THE WORLD; THIS IS IMMERSE BETWEEN TWO PLANS: THE DIVINE PLANE AND THE WORLD PLANE. A LAMENT, BY ITS ETYMOLOGY IS RELATED TO A NEGATIVE EMOTION, BUT IT CAN BE INTERPRETED REVERSE IN WHICH THE SAME CAN BE A CHANNEL TO RECEIVE A DIVINE BLESSING. WHEN MAN ACHIEVES THE AROMA AND BEAUTY IN A FIELD OF FLOWERS WHERE EACH ONE DIFFERS FROM THE OTHER, ACHIEVES A DEGREE OF CONSCIOUSNESS WHERE IT CONSIDERS THE APPROACH TO THE WORLDWIDE THINGS AND THE NEED TO HAVE A CHANNEL WHERE IT IS BLESSED BY GOD.

A LAMENT, BY ITS ETYMOLOGY IS RELATED TO A NEGATIVE EMOTION, BUT IT CAN BE INTERPRETED REVERSE IN WHICH THE SAME CAN BE A CHANNEL TO RECEIVE A DIVINE BLESSING. THE MAN RECEIVES A REFLECTION FROM A DIVINE SOURCE. THIS IS A BLESSING THAT WE WOULD LIKE TO APPRECIATE AS A MIRROR OR AS AN ASTRO. IN THE CASE OF THE MIRROR, AS AN ALLEGORICAL LANGUAGE, IT IS INTERESTING AS WHEN IT BREAKS, IT IS NO LONGER FILLED WITH AN EGOCENTRIC REFLECTION AND ALLOWS IT TO BE FILLED WITH LIGHT. EVERY DAY THE MAN IS IN THE FACE OF HIS OWN AUTONOMY OF THE WILL, THE APPROACH TO THE WORLD THINGS AND THE NEED TO HAVE A CHANNEL WHERE HE RECEIVES THE BLESSING OF GOD.