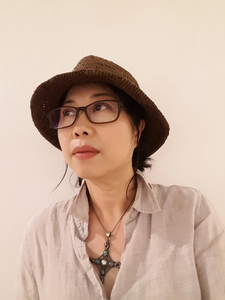 The starting point of my task starts from my ego.
The question about my identity just popped up while always dreaming of breaking away from the routine of my daily life. "Am I living by myself?", "What is my own unique feature of me?"
"How do I recognize myself?", "What makes me feel more like myself?"
In order for me to express my own ego, it was necessary to redefine it while having those continuous and connected questions. I tried hard to approach the nature in order to return to something before a concept, an idea before an idea, and an ego before an ego.
ㅡFrom the artist's notesㅡ

Park Jinwha
Artist Park Jinwha received many art awards including The Best Awards at the 49th Grand Art Exhibition. She graduated from Ewha Women’s University and studying in Graduate school of fine art Hongik University. She experienced fifty times of exhibition experience including three times solo invitation show.
Redefining ‘ego’, she tries to express her artistic belief that within incomplete shapes and the continuing cycle of birth and extinction, we all reduces into materials. Her new artwork “Her Story” well depicts her self-portrait.

* The following article is an excerpt from the part of the article by Yu geunoh, and translated by EM Huh Curator.
Images and Identity
(the preface omitted) Defining the emotions confusingly intertwined with each other inside human as 'self' and delving into it as earnestly as possible, Park Jinwha reveals her distorted inner world.(omitted) Her works of distorted human figure symbolize love and hatred. In this perspective do variously contorted human figures and objects in her painting serve as an outlet of individual identity recognized as oppressed emotion, which means that she ultimately pushes the envelope of her artistic sincerity thereby approaching the origin of her art world and the essence of her existence. (omitted) We can safely assume that various shapes on her canvas translate into the co-existence of 'persona' and 'self', and it is for this reason that the human figures on her canvas are often depicted as Janus or two faces. (omitted)

Park Jinwha is a qualified artist who, by her own unconventional images in her painting, keeps examining herself and daringly uncovers her 'self'. She exerts herself and brings soul and emotion to her images in order to seek internal unity between 'persona' and 'self' in the world of both reality and imagination. Her paintings have an aesthetical power to freely cross back and forth between the subject and the object, time and space and reality and imagination. Her works are the very result of constructing her own art world through ingenious analysis by her own methodology and the reflection on art itself by incessant 'self' finding. It is meaningful in that she invites audiences to the world of her artwork communicating and sympathizing with them.
(the rest omitted)