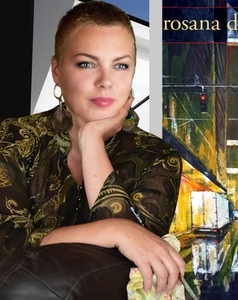 Her paintings have been described as "visionary works". From the neo-surrealist's perspective, she managed to fascinate art collectors around the world. Her most important provocative painting, which describes an apocalyptic event called "05.10.2020", stirs up the excitement among art connoisseurs, as it awakens both the feeling of distress and calm. As a skeptical dreamer, she is focused on comparing old times and current events from the angle of an observer. Feeling a change in social behaviour and the natural environment, she is anticipating escalation and clarification. Her work reflects the tendency of a woman who, through growth in several political situations and several countries, has developed a view of the world through the clash of contradictions.

Rosana's tendency in art is not following a trend, a cultural stream, or a fashion wave. Her production depends on the feeling that is tied to a given time, space and the message. Her paintings can come to us from the distant past or breathe the atmosphere of the future. Each scene absorbs as much of its environment as possible, therefore her technique and style vary from picture to picture.
The media she uses for her paintings are mostly canvases, acrylic, oil paints, synthetics, sand, plaster, charcoal and pencils. She likes modern abstractions, but also chiaroscuro. Her paintings represent a Neo-surrealist era where she can immediately use all her skills and dreams at once.

Filling the world around her with images and shaping it to satisfy her gently narcissistic nature began at an early age. She painted 3D pictures at the age of 4, then had her first public appearances at the age of 6, drawing buildings in the town's square. By the age of 14 she has filled her home with paintings and sculptures. Having both very artistic parents, she has spent her childhood among the best of the Czech cultural and creative society including her mentors and teachers: Karel Žaluda, Jiří (Giorgio) Stejskal, Věra Boudníková-Špánová, David LLoyd, Jaroslav Domiter. She is mesmerized by the works of Cesar Santos, Steven DaLuz, Hieronymus Bosch, Salvador Dalí, Peter Paul Rubens and others.

Permanent life abroad since 1991 has offered a wide variety of possibilities where her style of creation has found fertile soil. The collection of her art can be found in private collections, but also in business and corporate premises in many EU countries.
It was in the UK that she managed to maintain a stable client base and at the same time develop her style with several new modern techniques and media. It was a 3D art, street art, graffiti and music production for British TV channels like Channel U, BBC Channel 4 and Lion TV, where she met her crowd in the creative heart of London. She had participated in exhibitions and opportunities for artistic production, as well as offers for creative positions in the music industry.

The two main workshops are in Clacton-on-Sea (UK) and Bílovec (CZ), where she stores the majority of her latest work in the recently restored 18th century countryside estate. Her newly acquired premises of Gallery Montfort (Gallery M) is undergoing a vast reconstruction and will be officially open to public in May 2020.

She participates in a variety of charity projects in Europe and the US, which has earnt her awards by City Councillors and the White House. Together with other awarded participants she was given the International Prize Velazquez 2019 in MEAM European Modern Art Museum Barcelona on the 06.04.2019, International Prize Michelangelo received in Brancaccio Palace in Rome on the 14.07.2019 and two Awards of Excellence as the finalist of INTERNATIONAL CONTEMPORARY MASTERS in Santa Barbara (CA).

As a result of my skeptical view of humanity and the increasing freedom of unfiltered information I have painted an event "05.10.2020". I have no particular reason why this date, it just mathematically appealed to me.

Viewers of this painting have contradictory and perhaps very intense emotions such as: fear, destruction, inevitability but also freedom, final solution and liberation

Internet of things (OIT) is long here. What is the next step? IOL- Internet of Life. It is a state where every human is connected to the Central Brain System and does not need to listen to the basic instincts of evolutionary process. Life becomes somehow comfortable, secure, self-explanatory.....why are we so sad then?

Story of inner happening reflected in woman's face, who has given up on fight for her life after a flood event.

"The Big One" is an earthquake scientists anticipate at any time. The St. Andreas Fault has not moved much for past few years and the natural tectonic subsidence has been prevented. For now we hope the Big One never comes.....One is sure though....It is on its way, as the geological movements cannot be stopped.

The image of a fruit resistant to freezing conditions in outer space, perhaps on another planet. I am often thinking about the humanity's attempt to colonise the space and how Elon Musk thinks this is our only chance of survival as a species....He wants to send his red car in? Ive got my red cherries there already.

The singularity event can happen many ways. This is one of them. And when it stands before you there is nothing else one can do, just sit back and enjoy the view. Just do yourself a favour and don't take a deep breath.