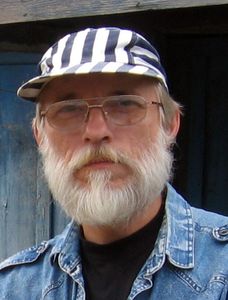 It doesn’t make sense, approaching a painter with questions like, «What did you mean by that picture? What is there on it?» Connoisseurs, art critics, mere visitors should ask such questions themselves in the first place. That’s what I found out when I met this painter, Vladimir Abaimov.
The way it happened, before I actually saw his paintings I had a chance to find out spectators’ opinion on them while leafing through his exhibitions’ reference book. Reading these most interesting notes I was a bit in two minds on how to treat this painter - some people would feel envy to his talent confessing on how close and clear his meaning was to them, others would recommend him to change his occupation for their not making a thing out of his paintings. What’s more, some would predict him success and prosperity as sure as some astrologers might do while others would condemn him to failure with as much fervor.
A work of art is appealing directly to our soul and feelings, so should we start analyze a picture the way we might prepare a butterfly, we’d just deprive it of its initial meaning. Spectators though keep on asking stubbornly, «What is it / Why is it for» or stick their claim, «No, I’d make it otherwise / It can’t be this way». Don’t all of us know though the difference between a thing and a thought caused by it; between the visible, something you can touch, and mental images, fantasies, imperceptible and mysterious interchanges of feelings within our soul? The one who is capable of expressing it, depicting it, is a painter. A painter is like a medium capable of converting sounds, words and feelings into colors, shades and lines. There are some people interpreting Vladimir Abaimov’s diversity of themes and technique as flirting with spectators or lack of ability to find «his own ground», his «theme».
The painter himself comments though that a choice of style, form and painting technique is subject to a certain aim and concept. If he gets attracted by, say, smooth resiliency of Siberian apples, he just takes those apples the way they are and one can see spectators contemplating his «Still Life with Wine» with some really appetizing look enjoying their crisp freshness.
These paintings are realistic, intelligible, and spectators like them. Some others though leave them confused. «What can «disordered parts» tell about disordered parts?» «Yeah it’s clear about «Pink Floyd», but why - Over the City??», these are the questions one can hear every once in a while about his «Wish You Were Here / Pink Floyd Over the City» painting. I do know something about this group’s music that seems to have a most rare property ascribed to classical music only - this feeling of soaring, being over, having that unearthly shade about it like taking you to the sky.
Vladimir remembers the time when pictures of such kind were not allowed at the exhibitions; the «understood» pictures were sorted out into one pile, the «not-understood» ones into the other.
A man leaving crucified Christ in twilight - face thoughtfully to the ground, back turned at Jesus... («Loneliness»). What is it all about - searching for God or looking for an answer within oneself? Could be anything - and so much for an agitated spectator to quest and think about.
«Have you noticed how visitors change from exhibition to exhibition?», asks Vladimir. For some reason I remembered a spectator’s note sounding nearly poetical, «What does it have to do with us if suffered you or not?» I only wonder if anyone has ever seen a painter free from suffering and anxiety. Any true painter is doomed to loneliness and some kind of misunderstanding due to his uniqueness. And there is tragedy and happiness in his inability to lock himself up withdrawing from the surrounding reality. The sense of inner freedom as the most necessary creative condition enables a painter to work without limits, but then comes the moment when it has to be shown, brought outside.
On his way to spectators Vladimir Abaimov came over many doubts and difficulties, both subjective and objective. He is organizing his own exhibitions arranging the pictures in a deliberate order. This order, by the way, is not aimed at perception’s simplicity; the painter is keen at mixing genres and styles - life is not something laid out on a shelf.
I’m sorry to say I failed to see all of Vladimir’s paintings - part of them is bought and taken abroad by foreign visitors, part is scattered around in private collections and city galleries.
About a dozen of his paintings were «appreciated» by some thankful onlookers in their own specific way: they just got stolen through the exhibitions. But the game is worth the candles while notes like this keep on being written, «Feel like coming back to your pictures, to see and to think», «You see the world in a different way but I appreciate the way you look at it».
A whole choir of voices kept on sounding in my head for a long time: those of the spectators’, the painter’s, the one of my own, while images created by Vladimir were changing each other before my mind’s eye - happily smiling face of the painter’s wife; Louis Armstrong blowing out his own soul through his trumpet...
I viewed a painter - his new image already clear or just being conceived. Now he’s approaching a clean white canvas or a sheet of paper - before this world was created - and is hesitant to touch it for he can’t dare to take responsibility as a creator. But he will do it in the long run, otherwise what has he come into this world for?
Olga Babanova

Oil painting on canvas. Vladimir Abaimov.
The formula of art is simple: the artist's fantasy plus inspiration creates a miracle.

“The Souls of the Trees”

Oil painting on canvas. Vladimir Abaimov.
Another day lived. Sunset with gulls added to the piggy bank of visions.

Oil painting on canvas. Vladimir Abaimov.
An oil painting on canvas, “Bad Apartment, ” written after the novel by Mikhail Bulgakov, The Master and Margarita, my favorite book. In this picture I tried to present the multiplicity and multidimensionality of the “bad” apartment where famous events take place.

Give, for Christ's sake! Подайте, Христа ради!
This picture is about Russia of the 90s.

Oil painting on canvas. Vladimir Abaimov. The Death of a Deity.
Man grows, moves. The outlook, worldviews, ideals change - some die, they are replaced by others.