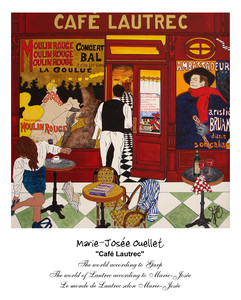 Starting from the façade of a building photographed while travelling abroad or else, the artist invents a mise en scène, a scenario including imaginary characters taken from real life, films or books.

The black and white squared floor is a constant in most of her paintings. It reminds her of an enchanting moment of her childhood…, that long tiled corridor where her father used to teach her how to dance – her second big passion – on such black and white squares. Like Fred Astaire, he would bow with an invisible top hat and she would curtsey with an imaginary long dress before starting a waltz.

To this souvenir of her tender age is added a taste for the ambience of cafés which dates back to her teenage years. In 1967, her father opened a café named La Galoche on Rue Saint-Denis, next to the Saint-Malo café. It was the first café-terrace with a Morris column in Montreal !

On top of these elements was a taste for foreign countries after her living for two years in Frankfurt, Germany. From all of this comes the source of her inspiration.

In L'actualité médicale of June 2, 1999 (19,000 copies distributed to Canadian francophone doctors and to managers of pharmaceutical companies), art editor Myriam Gagnon wrote: “Marie-Josée Ouellet combines the naïve with the cartoon colorist and the stage producer. Each of her paintings tells a short imaginary story. Her cafés are, as in real life, place where anything is possible and where the improbable can happen just as easily, meeting places, waiting places. They are her stage, which she fills with characters and, to our surprise, we suddenly discover in the features of a customer or waiter the familiar traits of Robert Charlebois, Woody Allen or Agatha Christie's Miss Marple, Alfred Hitchcock, Sydney Pollack, Toulouse-Lautrec a well-known Japanese producer or Marilyn Monroe: 'I paint what I love most: The European lifestyle and the cinema'.”

“Marie-Josée Ouellet varies her style according to the subject: Almost graphic when she is depicting the stark simplicity of a Greek tavern overlooking the Aegean Sea, neo-impressionist when she is illustrating the smoky atmosphere of a literary café, inspired by the baroque or decidedly expressionist in the chiaroscuro tradition reminiscent of Toulouse-Lautrec.”

A self-taught painter, she has been living on her art since 1995 and she is exhibiting every year in Quebec and the United States. She is present abroad (a few paintings sold in the South of France, in Paris and in England). From the office of the President of a leading biotech to the Governors' room of the Collège des médecins du Québec, her paintings are to be found in big firms or in physicians' practices. She is a member in several painters associations and she has been exhibiting in famous art galleries, among them the prestigious Galerie Berensen (1472 Sherbrooke Street West in Montreal – from April 2003 to June 2004, at the same time as the first exhibit of Picassos's ceramics in Quebec), the gallery Le Castelet in St. Sauveur, McCord Museum, Plattsburgh Museum Burke Gallery, the Council of the Arts for Clinton County (USA), Lake Placid Center for the Arts, the Stewart Museum in Montreal's St. Helen's Island, Galerie Bel'Art and Galerie Royale in Quebec City, and Galerie Astrof in Montreal. In 2005-2006, se was the exclusive exhibitor at the Stonehaven Relais, Châteaux & Spas, in St. Agathe, Quebec.

Then there has been PBS New York Art Auction program, where a giclée edition of her painting Quiet, We're Shooting sold for US$1200 in the USA. For this occasion, some of her paintings were exhibited at McCord Museum and at Plattsburgh Museum. An article full of praise published in the USA brought her an interview with director Paul Larson of PBS Mountain Lake New York for the Art Express program. In August 2002, the recording took place in the Golf Club Balmoral chalet, in Morin Heights, where her works where exhibited and in her studio. The program was broadcasted in November, December and January, which brought her new contracts. She also drew several front pages of Rogers Media magazine Avantages and she illustrated the menus and the publicity of Euro-Plus café, in Pointe-Claire, Quebec, where other works are permanently exhibited. She also participated to the front page of the novel Saga against fast food, by attorney Édward Mattey, and she designed several of the characters.

In 2003 and 2004, a few paintings were exhibited at Ogilvy's Tudor Hall, in Montreal, for the Women's Art Society of Montreal (she won an honourable mention for Miss Marple in Paris in 2003).

In addition, with her painting Café bleu, she has become Vintempo company's mascot for its prestigious Club Vinaffaires belonging to Jean Aubry, wine expert, wine reviewer for Le Devoir newspaper and author of the Guide Aubry des meilleurs vins et spiritueux. The novelist Luaf, from Bordeaux, France, was inspired by one of her paintings – La Dolce Vita – for one of his works.