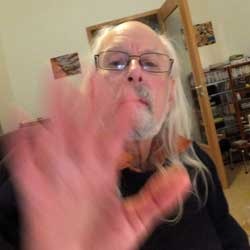 Ira Schneider was born in New York, 1939. He lives in Berlin, Germany. Between 1962 and 1968 produced 8 short experimental films including "Lost in Cuddihy" and "The Ghost of Wittgenstein". The installation "Wipe Cycle" produced with Frank Gillette presented in the first video art group show, also including Nam June Paik, N.Y. 1969. Schneider was co-originator & editor of the video journal, "Radical Software". Schneider's "Manhattan is an Island" a video installation was exhibited in the Kitchen, Everson Museum in 1974, and at the Whitney Museum, N.Y. in 1977. In 2006 it was purchased by the Reina Sofia Museum in Madrid & exhibited until April 2007. He co-edited "Video Art, an Anthology", N.Y. 1976, with Beryl Korot. The video installation "Time Zones" (in which one could see all around the earth at the same time) was shown in the Whitney Museum 1981 and over the next years in the Palais de Beaux Arte, Brussels, Kunsthalle Mannheim, Museum of Modern Art, Vienna, Nouvelle Museum, Lyon and the Barbican Center, London.
He has had exhibitions at the ZKM, Karlsruhe and has been the recipient of Guggenheim and Fulbright Fellowships. In 2006 he was the Hannah Hoech Prize winner and for “-+2005” was selected by the Marl Festival. He has had solo shows at Kunstpunkt Berlin 2008.
2008 he also participated in group shows at the Les Rencontres Internationales Filmfestival, Pompidou Centre, Paris; Caixe and Viva Festival, Spain; U.F.O, Hamburg, Germany; L.A. Center for Digital Art, California.
2009 he has participated in group shows Celeste Prize adjacent to the Venice Biennale and the Hamburg Documentary Film Weeks. Schneider was again invited in 2009 and 2010 to present works at the Rencontres International Film Festival at Pompidou Centre, Paris, the Reina Sofia Museum, Madrid, and Haus der Kulturen der Welt, Berlin. June 2010 he was prominently featured in the "Changing Channels" (Ira Schneider's title) exhibition at MUMOK, Vienna. In September 2010 Schneider organized the “Schuster/Schneider 2 + Friends” exhibition at the Freies Museum, Berlin. In Nov. he participated in the symposium on the 40th reunion of the Raindance video group at Loyola University, Chicago. Participant at “Rock & Art”, Pecci Center, Prato, Italy; Solo show “11.11.11”, Prima Center, Berlin.
2012 featured artist in ICA, London “Remote Control” exhibition.

I have been making photographs since 1949. What follows are some of the more recent ones. They range from comic to documentary to abstract.

Taken from the train.