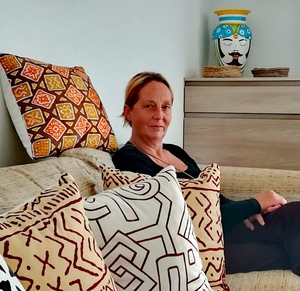 The paintings of Kali Giade - Isabelle Lemaitre - catches the eye of the observer and carries it to a fantasy world where everything is intangible, immaterial, filled with fleeting illusions taking shape under her skilled hands. Using the iconic rhinoceros as the the vehicle of artistic exploration, she speaks to us in the aristocratic language of Surrealism.

A kind of Surrealisms suspended in time that goes beyond the oneiric vision of such an icon.This ability makes her an extremely complex and cryptic artist leaving ample space for the viewer to imposes his own interpretation. Her art becomes an exciting journey into a world inhabited by flying rhinos .

The art of Giada Kali is work that must be decrypted to fully experience the immense chromatic balance understated conceptualism she has employed in her work. A kind of figurative hyper-realism that binds a traditional scholarly approach with a surrealism that utilized the pictorial space to imbed a concept. Such a of concept that utilizes the temporal space to a point that leaves us uncertain of visual reality and imprisons the psyche like a man in Alcatraz.

Giades paintings transform the previous concrete thought of art's pictorial rationality, rejects it and shows us art is changing. Changing into a hybrid that is able to seduce the viewer into believing the created illusion.
Salvatore Francesco Saverio Russo

Dedicate to the soul and spirit of the human