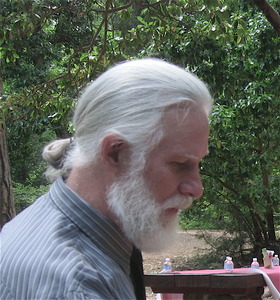 Solly is an educator and artist. He depicts forested landscapes to highlight patterns in nature or to make environmental commentary regarding water and wild fires issues as our climates change.

Stained glass (SG) on glass (1-3 layers, but mostly 2; layer1 = large green sheet of SG used as the substrate). The third layer is limited to several pieces.

This work is a third in a series depicting plants in the C-S National Monument of SW Oregon.

A single Myosotis sylvatica (forget-me-not) plant growing along the Pacific Crest Trail provided the inspiration. Only one inflorescence (a single stem with multiple flowers) is represented here; it is magnified 15 times and viewed downward from a moderate angle.

This unassuming plant offers (us) no fragrance, flavor, drug, nutrient, or fiber. Its simple, minute flowers offer only pinwheels of pale blue.

This work is meant to be an allegory about the response of mobile animals (and their passengers) to higher -- and rising temperatures. Monet’s magpie searches for a new niche but has reached the end of its favored habitat. It is perched on a fencepost situated in an oak savannah at an elevation of over one thousand feet higher than magpies currently range.

Monet's Magpie commemorates Claude, of course, and this particular field for its environmental and historical significance. This oak savannah ravine is part of the privately-owned Summit Ranch, across the road from the boundary of the Cascade-Siskiyou National Monument, headwaters for Tyler Creek -- and 3/4 mile uphill from my cabin. Uphill of this field lie remnants of an outpost used by Pony Express curriers, who followed the Applegate Trail over the densely forested Cascade mountains down into the Rogue Valley and Ashland.

“TWO TUFTS OF PHOENIX DOWN”

Smokey the Bear’s admonishment to prevent forest fires does not reflect what forest managers and scientists understand to be the natural role of periodic fires in maintaining forest health. I want to introduce Smokey 2.0, a demigod or jinn, to spread the message that many of the forests of the Western US require fire to perform such services as destroying stand-replacing insect outbreaks, reducing tree overcrowding, producing a mosaic of successional communities, increasing biodiversity, and recycling nutrients.

The following story adds context to the composition.

Duende, a forest jinn, having found the tree struck by lightening from the storm that raced across the mountainside, paused near the ensuing wild fire. He both hoped and feared that the fire would attract the Phoenix in its decent, for this would not be his first experience. He aimed to snatch two feathers; however, the searing heat of the encroaching fire already gave him pause, as did the desire to hold onto his past. If Duende were able to withstand the heat of the blaze, then he would posses the Phoenix’s regenerative power in the tufts when they burned to ash. Rubbing ash over his body would mend his heart and renew his body and spirit. Wherever he were now to venture, new life would regenerate from the ash that fell from body.

Stained Glass, 27 x 21 x 1 inches; Duende, jinn of the forest, summons the power of Moon to resist the lure of Wild Fire’s promise of renewal. Sometimes, we have to fight fires.