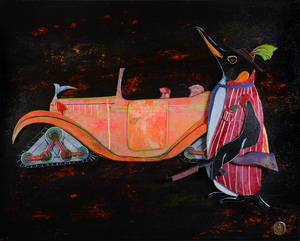 Igor Zusev is a creator of chaos art. After a lengthy career in tech and AV project management, Igor discovered art as a way to unwind and connect with himself...and it all started with adult coloring books, shortly followed by a gifted paint set. He dove into it with enthusiasm, often scouring thrift stores for elements he could add and experiment with. Igor settled into his unique style of using rollers to paint, and layering cut-outs onto canvas. Sometimes he’ll produce a deeply personal piece, and other times you’ll find him exploring messages he wants to portray in his style.

This portfolio is an evolution of my work. As I expand as an artist and tap into my emotional gamut i work through it by my paintings and photography

This work is about my first vivid and disturbing memory. I was around 4 or 5. Sledding on a snowy day. Another kid decided to head down first. He kept doing this without issues a couple of times and then his luck ran out. I watched the sled sink a bit and reveal a stump. Something that he could not have seen as he was watching the ground. The blow sheared his head off. I just remember all the blood

With some final touches. As I said previously this one is my interpretation of human sexuality. How we are connected by nature and bound to each other. The two figures are imbedded on a modified version of a Egyptian ankh and connected with their hands bent behind their back. Their backs are slightly arched and they are both in ecstasy. They represent the sexual desire and release and closeness that we all crave

This image is my view on religion and it’s dogmas. I’ve been learning a considerable amount and growing where the question of religion is concerned. I’m still atheist however, I’m learning and accepting spirituality, its diversity , complexity and healing properties. This composition is my way of expressing a need to review all religious dogmas

18X24 . This image was inspired by the memory from my 8 year old mind. It’s a representation of a chaotic scene during my immigration from Russia. At the time we were Jewish refugees, seeking a better life. This is how we were treated going from Vienna to Italy. This chaotic scene left its impression in my young mind.
The soldiers, represented in this image in green, were very aggressive, shoving people, separating families and children from their mothers. In this scene, starting from the left, we see a soldier standing to the side as a child fell from a fathers grasp from the train window. The soldier stood there motionless, and did nothing to help.
Next, we see a couple, also passing their son through the window, and a figure behind them crying.

Below the window, we see a nurse detained from assisting a sick or injured child by soldiers.

In the following window, we see more chaos with people trying to pack their luggage through the windows as the soldiers were blocking the door. Some were trying to drown themselves in alcohol.
Finally, the words Leave are there to set the general mood and underlying feeling. They wanted us gone, they wanted it done fast, and they didn’t care who got hurt.