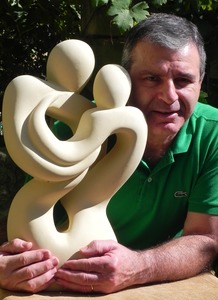 Joe Xuereb (b.1954)
Joe Xuereb, a self-taught sculptor from the island of Gozo, sister island of Malta, was introduced to the Neolithic sculpture by the late amateur archaeologist Marie Claridge, in 1973. He discovered his artistic inspiration in Neolithic sculpture, and over the years, though his message has cut across universal boundaries, has made his reputation by specializing in this type of art. Xuereb's art is, therefore, closely linked with the prehistoric past of Malta, and his medium, the soft globigerina limestone , is highly adapted to his working technique, using traditional tools inherited from his father.
His works of art have received international recognition due to the numerous exhibitions he held in Groningen, Paris, Milano, Berlin, Darmstad, Duesseldorf, Adenau, Stuttgart, Heidelberg, Sommerhausen, Heitersheim, Munich, Hamburg, Bremen, Essen, and representations in different Art Galleries’ salons held across Europe and USA. In 2015, his work was selected to represent his country in the ‘Cultural Days’ organised by the European Central Bank, in Frankfurt. Over the years, his sculptures were reviewed in various art magazines such as New York’s ‘Gallery & Studio’, Norway’s ‘Kunst for Alle’ and Netherlands’ ‘Woonbeeld’. In 1999, his works received extensive coverage on CNN’s ‘ArtClub’ special feature.
His public placements can be viewed at the Gozo Ministry where his Commonwealth theme sculpture was unveiled by Prince Philip, the Duke of Edinburgh in 2005 while his ‘Gossiping’ monumental sculptures are displayed at the public Rundle Gardens in Victoria, Gozo. In March 2014, the President of the Republic of Malta inaugurated the first Sculpture Garden in Malta at the Verdala Palace gardens where Xuereb is represented by his two figures ‘Respect’ of height of two meters.
Today, Xuereb runs his own Sculpture Gallery, which so far, has welcomed visitors coming from over 100 different countries.

Two abstracted figures bonded together and hand carved from limestone.

Inspired from Malta's Prehistoric Temples artifacts the figure looks in an attentive mood looking to the future. It is hand carved from limestone.

The piece shows the love and guidance a mother offers and gives to her offspring..It is hand carved from limestone.

An abstracted figure in pensive mood and hand carved in limestone.