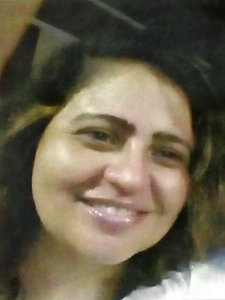 I work with vibrant colors,nature,legends of my country and digital prints.

Also known as the “water’s mother”, Yara is a character of Brazilian folklore. According to legend, of indigenous origin, Yara is a beautiful mermaid (woman’s body from the waist up and fish from the waist down) brunette with black hair and brown eyes.
Legend has it that the beautiful mermaid is in the rivers of the north of the country, where she usually lives. He spends most of his time admiring her beauty in the reflection of the waters, playing with the fish and combing her hair with a golden comb.
On the rocks of the slopes, it usually attracts men with beautiful and irresistible song, which echoes through the waters and forests’s region. Victims often follow Yara to the bottom of rivers, where they never return. The few who make it back end up going crazy because of the mermaid’s enchantments. In this case, legend has it, only a ritual performed by a shaman (indigenous religious chief, healer) can rid man of the spell.

Character Origin
The Indians of the Amazon region say that Yara was an excellent warrior India. The brothers were jealous of her, for her father praised her so much. One day the brothers decided to kill Yara. However, she heard the plan and decided to kill her brothers as a defense. After doing so, Yara fled into the woods. But her father pursued her and managed to capture her. As a punishment, Yara was thrown into the Solimões River (Amazon region). The fish that were there saved her, and since it was a full moon night, she was transformed into a beautiful mermaid.
Curiosities:
- The word Yara is of indigenous origin. Yara means "one who lives in the water".
- According to some versions of the legend, when out of the water, Yara becomes a beautiful woman, losing her powers.
“The” queen of the waters, “as Yara is also known, possesses the power to bewitch men who look directly to her eyes.

According to legend, a Pink Dolphin leaves the Amazon rivers on the june party nights. He is a character of Brazilian folklore, with special power, can transform into a beautiful, tall and strong young man dressed in white social clothes. He wears a white hat to cover his face and disguise his big nose. Go to parties and night dances looking for beautiful young women. In its gallant and talkative manner, the dolphin approaches the unaccompanied young women, seducing them. Soon after, he can convince women for a walk on the bottom of the river, where he usually gets them pregnant. The next morning turns back to the Dolphin.
The Pink Dolphin is considered a friend of the fishermen of the Amazon’s region. According to legend, it helps fishermen while fishing, as well as safely driving canoes during thunderstorms. The Dolphin also helps save drowning people from the river.
Popular culture:
- In popular culture, the Dolphin’s legend was used to justify the occurrence of an out-of-wedlock pregnancy.
- Even today, especially in the Amazon region, it is often said that a child is the Dolphin’s daughter, when they don’t known who is the father.
Trivia about the animal boto:
- The scientific name of the Dolphin is Inia geoffrensis.
- The Pink Dolphin is also popularly known by the following names: red Dolphin, square coast Dolphin to and uiara.
- The Pink Dolphin is an aquatic animal of the order of the Cetaceans, just like the whales.
* The Pink Dolphin is from river’s water.

Also known as “running fire”, boitatá, in Brazilian folklore, is a large fire snake. This imaginary animal was first cited in 1560 in a text by Jesuit Father José de Anchieta. In the Tupi indigenous language, “mboi” means snake and “tata” fire.
The legend in the North and Northeast
According to legend, the Boitatá protects the woods and forests of people who cause fires. The boitatá lives within rivers and lakes and leaves, that is “habitat” to haunt and burn people who practice forest fires. The Boitatá can turn into a log of fire. This animal spends most of its time crawling through the forests in the darkness of night, for it is a troubled soul who must pay its sins in this way.
The legend in the South
The explanation for the emergence of the fire snake is related to the flood (biblical story that tells about the rain that lasted 40 days and 40 nights). After the flood, many animals died and the snakes laughed very much, because the food was abundant. As punishment, their bellies began to ignite, lighting up the whole body.
Scientific Explanation:
Researchers say that this legend is associated with fires, which occur spontaneously due to the burning of gases from the decomposition of organic material.
Curiosities about the legend
Some versions of the legend say that if a person is setting fire to the forest and encounters the Boitatá ahead, will have a terrible consequence. You may die, become blind or even go mad. The fire that comes out of the mouth of the Boitatá is magical, so it does not burn the trees and plants of the forests. For the same reason, it also does not go out when the folk creature is in the water.
- In Northeastern Brazil the boitatá is also known as “corridor fire”.
“Running from this fire snake is not the best way out.” Legendary tellers say that the ideal solution is to stand still, eyes closed and breathing still.

Is very popular in Brazil. Legend has it that the moon was a god who dated the most beautiful young indians and whenever she hid, she chose and took some girls with her. In an indigenous village, there was a beautiful young woman, the warrior Naiá, who dreamed of the moon and could hardly wait for the day when the god would call her. However, the young woman did not care, since she was in love with the moon. This passion became an obsession when Naiá no longer wanted to eat or drink anything, only to admire the moon. One night when the moonlight was very beautiful, the girl came to the edge of a lake, saw the moon reflected in the water and believed that the god had come down from the sky to bath there. So, the girl threw herself into the lake toward the image of the moon. When she realized that this was an illusion, she tried to return, but failed and drowned. Moved by the situation, the moon god decided to turn the girl into a star unlike any other: a water star - Royal Victory. For this reason, the fragrant white flowers of this plant only open in the night.