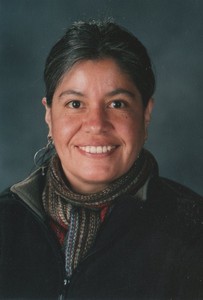 Born and raised in Lima, Peru. Gabriela Nunez moved to the East Bay
in her late teens. Since she was young has love for art. As she
developed her artistic ability, she primarily focused on the women
and children of the Andes. Gabriela’s inspiration comes from the
innocence of the Indian people of the Andes, the ready expression of
emotions on their faces, the size and strength of their hands and feet,
the hard diligent work they do for very little, especially the women
who tend fields, raise the children and hand make their own and their
family’s clothing. She is impressed by the close-knit, supporting
culture the exists amongst the women. Gabriela would like people to
see the beauty and pride she has for the women of the Peruvian
Andes and to feel the love she has for her heritage and culture.

Gabriela obtained most of her art training at Contra Costa College and
Laney College. Gabriela has been greatly influenced by Diego Rivera
and Vincent Van Goth, who both used brilliant colors and gave
movement in her brush strokes. She likes Diego Rivera because he
also painted indigenous of his country, Mexico. Gabriela uses
different mediums to express herself. She paints with oils, acrylics
and water colors. Her favorite medium is colored pencils. Today, she
is learning the art of print making and has made several etchings and
block prints. She has shown her work around the Bay Area , San
Francisco and San Juan Bautista, California.


Wayra- Save the
Earth

http://www.facebook.com/womenofthe andes
The Oakland Mayor and her
Husband, Floyd at my
house for 2011 East Bay
Open Studios.

The Oakland Mayor and
me showing painting that
she bough.

Women of the Andes